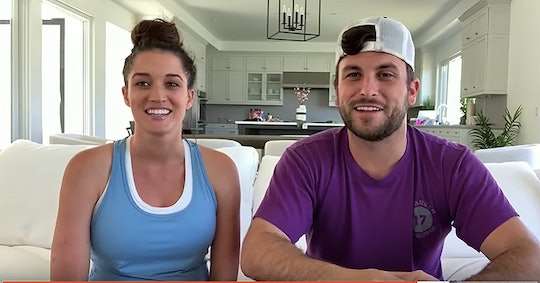 The pure joy of welcoming a new child into the world can also be matched by the challenge of parenting this new life. From the lack of sleep to labor recovery, it can be a lot to manage, with each parent reacting a bit differently. In fact, Jade Roper and Tanner Tolbert's updates about their son perfectly capture the sentiment that each parenting journey is unique.

Bachelor alums Roper and Tolbert welcomed their second child, a son named Brooks Easton Tolbert, on July 29. The little guy made his dramatic debut in his parent's closet of all places, when Roper unexpectedly went into labor. Now the fam, which includes Emerson, 2, is adjusting to life with a newborn in the house.

For Tolbert, this has meant worrying over the pace of his bonding with Brooks. The new dad talked honestly to fellow Bachelor contestant Nick Viall on his podcast The Viall Files, about the issue, stating: "Before I had [daughter Emmy, 2], I always thought I wanted a boy. But to be honest, my connection with my daughter, probably initially, was the most strong."

He continued, "And I feel bad saying that because I’ve got a beautiful newborn son, but maybe it just takes time....I will love them equally, for different reasons, but I feel it right now more with Emmy and I don’t know why.”

As Tolbert shared that part of his adjustment, his wife of three years opened up about what she's going through. Roper opened up about having a bit of a rough start after discovering that Brooks' tummy troubles were due to a dairy sensitivity he shares with his big sister.

Roper first began to fret when Brooks endured nonstop crying and fussing in the first two weeks, but now the pediatrician has narrowed down that a lip tie. This condition can keep the upper lip from working as it should, potentially causing a newborn to struggle with breastfeeding and possibly affecting their weight gain, according to HuffPost.

With the doctor telling the new parents that Brooks does not need corrective lip surgery (at least for now), Roper's diet change helped him with processing nutrition. Roper noted, according to Us Weekly, that she had to give up dairy, soy and some red meat. The mom noted how the change has brought her much needed relief.

It's interesting that each parent has a concern, but in totally different areas. And it sounds like Roper has been ultra-connected with Brooks, while Tolbert is still getting his footing. Which is totally OK, of course — both appear to be great parents.

For Tolbert, the difference might be that he's actually more involved in the process this time around.

“When Emmy was [a baby], I was working my regular job, and I was gone most of the time...It was super easy," he said, according to People. "I hand it to all the stay-at-home moms and dads out there. If you’re staying home with your kid, it’s a lot. I am way more stressed now that I’m not working, at home with two little ones.”

Tolbert also admitted that the "newborn stage” is “really hard."

I sympathize with Tolbert, even though his concerns are a little less pressing than Roper's as she's the main food source for Brooks. Still, it sounds like things are improving. Roper has clearly rebounded from what was a scary emergency delivery, Brooks is feeling better, and adorable little Emmy looks to be handling the transition to a sibling quite well. It'll all work out.

Yep, adding a newborn to the family is a big thing. It will change this fun-loving family's life forever, and all in different ways.