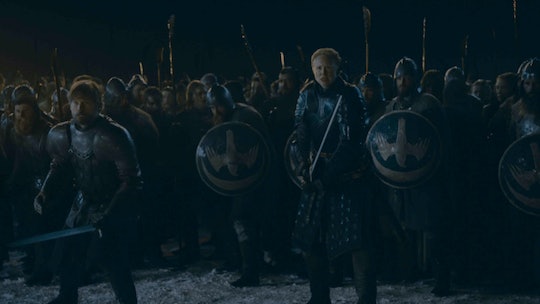 There were a few different ways the first episode following the Battle of Winterfell could go, and Game of Thrones settled on everybody having triumphant "hey look we're still alive!" sex! Among the happy couples were the Kingslayer and freshly knighted Brienne of Tarth. Jaime and Brienne hooked up on Game of Thrones and it was, in a word, everything.

During a post-battle feast that resembled some very relatable prom nights, Jaime, Podrick, and Tyrion convinced Brienne to buck her teetotaling ways and play a drinking game with them. She reluctantly agreed and, like most people when they're drinking with Tyrion, she found herself enjoying the evening. The game Tyrion devised involved each player trying to guess at truths about their opponents, and Tyrion crassly ventured that Brienne was a virgin. The tone of the party quickly shifted for the foursome and Brienne, clearly hurt, stormed off.

Just when it seemed the door had opened for Tormund to go comfort his big lady, Jaime f*cking Lannister (Ser Bronn's words, not mine!) chased after her! The whole exchange was so full of angst and horniness, it could have been ripped straight out of your fave '90s teen movie. And while plenty of fans would have been satisfied with a hinted-at hookup, Game of Thrones delivered the full blown love scene these two deserved.

Jaime catches up with Brienne and comforts her in his way — with lots of flirtatious ribbing. But before things get too tragically awkward, Jaime does what he does best: takes his shirt off and hopes for the best. Brienne seemed as caught off-guard as the rest of the universe but remember, she's full of Dornish wine, which gives her just enough courage to say, "I mean, I guess?" (Not her exact words.) Masc4Masc dreams really do come true!

Fans even got a bonus shot after the hookup of Jaime tenderly looking over Brienne's sleeping body, which was unbelievably cute. And Tyrion managed to grill him for details later without being overtly disrespectful, which suggests that everyone in the kingdom else feels as fondly about these two as fans watching. (Well, except for Cersei, probably.) In the end, Lady Sansa commands that Ser Jaime should stay at Winterfell as her guest, ensuring that he and Brienne get to stay together for the time being. Brienne can barely hide her joy.

Unfortunately, Cersei has a sellsword out for Ser Jaime's head. My guess is, her rage will only grow when she finds out her beloved brother ~laid with~ someone else — especially Brienne of all people. It puts her in grave danger if Cersei ever finds out.

In an interview with press back in February, actress Gwendoline Christie admitted that she had mixed feelings about her character getting a romantic arc this season. "It's two-pronged, because we have an unconventional character that hasn’t had to fulfill the traditional role of love interest. She’s done something else and existed outside of those realms," Christie said, according to Harper's Bazaar. "At the same time, as the seasons roll on, we see her as a human being and someone who wants to experience more of life. So why shouldn’t she have that and explore that?"

Needless to say, fans are pretty obsessed with the choice Game of Thrones wound up making for her.