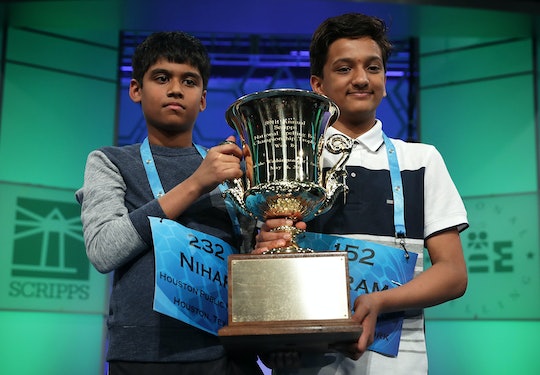 When the 89th Scripps National Spelling Bee began this week, there were 284 kid contestants, and the competition was formidable. Throughout the day Thursday, the tough word list whittled down the 45 remaining sepllers, as they missed toughies like Cheltenham, psyllium, and cacomistle, heard the dreaded ding and headed to the "cookie couch", where the losers consoled themselves with treats. But following round after round of an intense spelling battle among the ten who made it to the finals, TWO have emerged as the winners of the Scripps Spelling Bee, as it ended in a tie for the third year in row: Jairam Hathwar and fellow competitor Nihar Janga.

Although co-champions Jairam, 13, and Nihar, 11, were clearly ecstatic, it's an outcome Bee organizers had hoped to avoid, as they changed the competition's rules this year to discourage dual winners. Jairam's winning word was Feldenkrais, while Nihar nailed gesellschaft to clinch his place in the shared victory.

The finals aired live nationwide on ESPN Thursday evening, and all the spellers wowed, entertained, and most of all impressed the audience. There were some memorable and even surprising moments, like when Jairam was eliminated from, then reinstated into the competition when Nihar also missed his word.

In 2014, Ansun Sujoe, 13, and Sriram Hathwar, 14, nailed "feuilleton" and "stichomythia", respectively, to determine they would both be declared champs after they took turns firing off the correct sequence of letters to spell the 25 words on a predetermined list. It was the first time the Bee had ended in a draw for more than a half century, and then Vanya Shivashankar, 13, ("scherenschnitte") and Gokul Venkatachalam, 14, ("nunatak") did it again the next year.

Before the finals went live, Bee aficionados were already gearing up for a real nail biter, because these are some serious brainiacs. Earlier on Thursday, 13-year-old Cooper Komatsu, of Los Angeles, stunned the crowd when he correctly spelled rerebrace — plate armor for the upper part of the arm, FYI — without asking any questions about it, like language of origin, or clarifying the pronunciation. And Sreeniketh A. Vogoti, 13, of Jacksonville, Florida, has talents across the board, from from physics to computer programming to writing prose and short stories to playing the clarinet, according to his profile on the Bee's site.

In the rounds leading up to the madly anticipated final, there were some lighthearted moments, too, because the spellers, even the final ten, were trying to have a good time in addition to winning. Sylvie Lamontagne of Colorado hilariously asked pronouncer Jacques Bailly for an easy word, but she got 9th place last year, so clearly she can handle the difficult ones.

Nihar and Jairam won a cash prize of $40,000, as well as the hefty Scripps National Spelling Bee engraved trophy. That's not to mention the $2,500 U.S. savings bond and complete reference library from Merriam-Webster, $400 worth of reference works courtesy of Encyclopædia Britannica, AND a trip to New York City to appear as a guest on LIVE with Kelly.

Judging by the boys' performance at the Bee this year, they will be a blast to watch on LIVE, which presents, I'd imagine, a much less stressful atmosphere than the Bee. And I think both deserve as many cookies as they want as well, even though he managed to avoid the cookie couch during the competition.