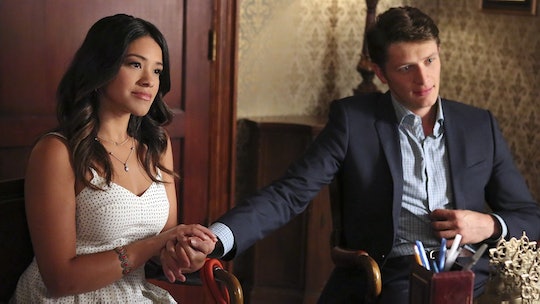 Jane Lost Her Virginity On 'Jane The Virgin,' But It Came With A Shocking Twist

The big moment for Jane finally came. Jane lost her virginity on Jane the Virgin and just as is the case for most of us, it wasn't as perfect as she hoped it would be. First, Michael and Jane struggled to even find the time to have sex. In a preemptive effort to make sure they didn't have sex before the doctor OK-ed it, Jane and Michael scheduled things back to back so they'd never have a moment alone. Unfortunately, two days later the doctor surprised them by saying Michael was well enough to perform physical activities (like sex). And although they tried their best to cancel everything, their window of opportunity closed, forcing them to wait until later.

Despite the wait, however, Michael and Jane's time to have sex finally came and while Michael thought it was pretty perfect because they "finished together," it turned out that wasn't actually the case from Jane's point of view. But more on that later because first she had some bigger issues to deal with. You see, she accidentally recorded her first time with Michael and then sent it to her professor, thinking it was the video/draft of her grandmother's story. Before Jane could undo it, the email was sent, leading to an awkward conversation with her professor.

Thankfully, aside from her professor being surprised to find out that was Jane's first time, she took it rather well. However, her professor did say that was probably why Jane's thesis novel was probably not that great, so she hoped now that Jane's had sex, she would be able to spice up her novel a bit. But first, she needed to figure out why she didn't orgasm with Michael during their first time together.

Because while having sex with Jane was great for Michael, it turned out Jane actually faked it in bed. When telling Lina about the awkward accidental sex tape incident, she revealed to Lina that she didn't actually have an orgasm, but knew Michael was close, so she faked it so it'd seem like they finished together. At first, Lina told her not to tell Michael about what happened for fear of it shattering his confidence. But when he offered to do what he'd done the night before, Jane confessed that she actually hadn't been able to finish on her end. Yikes!

Obviously, Michael wasn't thrilled by this newfound information, but he took it like a champ and he and Jane got to work trying to make sure Jane was able to be satisfied. However, the more they tried, the more difficult it seemed for them to get out of their own heads. Finally, after watching their sex tape and Jane pointing out what really worked for her, she and Michael were able to both achieve the pleasure they were looking for. And based on the cartoon that followed, it was amazing for both of them, which just goes to show how important communication between two partners can be.