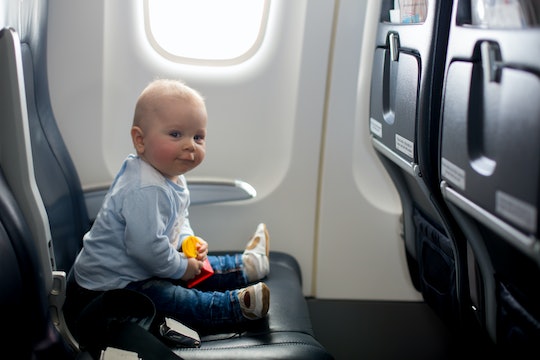 I have flown alone with four small children and yes, I would like my medal now please. Not because the kids were so terrible on the flight but because of the looks of fear and dread I was given by all of the other passengers when they saw me dragging my sons down the aisle. Pretty much everyone on that flight assumed the worst: that my children would scream throughout the flight and they would be stuck sitting there listening helplessly for hours. They didn't, but we were all stressed. So I don't think Japan Airline's baby seat map is the worst idea in the world. It might have been nice to have a designated family area without glaring.

Japan Airlines recently announced that it will be offering a new booking option for passengers who would prefer not to sit near small children in flight, thereby also releasing parents from the agony of having to deal with cantankerous passengers who don't want to deal with children. As the airline explains on its website, "Passengers traveling with children between 8 days and 2 years old who select their seats on the JAL website will have a child icon displayed on their seats on the seat selection screen."

Japan Airlines also notes that there will not always be an option where passengers can see a child icon displayed. For instance, only bookings done through its website will offer this option. And if there is a plane change, you won't be able to see where children are seated and therefore have to take your chances.

Perhaps unsurprisingly, people are already sharing their opinions of the new seat selection map. Some are fans of the new move, especially people who are worried about sitting next to small children who might scream during the flight (I guess they've never heard of ear plugs or watching a movie?). "Thank you, @JAL_Official_jp for [warning] me about where babies plan to scream and yell during a 13 hour trip," one such person tweeted. "This really ought to be mandatory across the board."

Other people, however, have noted that everyone was a baby once, and perhaps a little understanding and consideration for how difficult plane travel might be for small children wouldn't be the worst idea in the world. As one person pointed out on Twitter, "They are babies as we all once were. We need to learn tolerance or will soon start needing a map of seat locations for mouth breathers, droolers, farters, drunks, and perhaps a lot more things in life. What ever happened to life's surprises?"

Now before parents stage a revolt against Japan Airlines, it's important to point out that they are working towards making air travel easier for parents. Japan Airlines offers several "Baby Travel Support" options like reserving a borrowed child car seat free of charge for the flight, checking a child car seat also free of charge, priority boarding, and stroller rentals for the airport. And please don't forget the diapers and bottle-warming services the airline has available — this could be incredibly useful in a fussy baby screaming situation.

It will be interesting to see if other airlines follow suit, especially since this could be a delicate situation for parents flying with children. Some might see the idea of a child seat map as a form of segregation, a way of separating their children from the rest of the flight. Others, like myself, would simply be happy to have a family section on the plane and avoid cranky passengers. Time will tell.