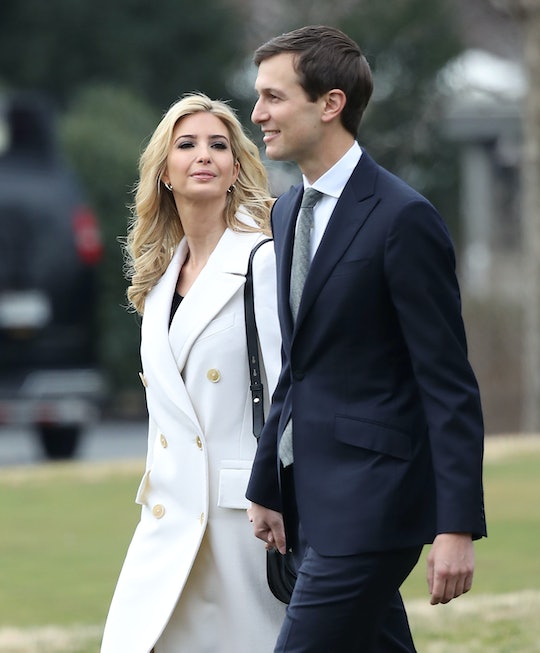 The lack of a vote on President Donald Trump's healthcare bill last week may have been a big setback in proving the President's infamous deal-making skills, but on Sunday, he announced his new business-like approach to running the country. According to The Washington Post, Trump has placed Jared Kushner in charge of the newly-created White House Office of American Innovation, which will work with private companies to improve the country. In an interview Sunday, Kushner told The Washington Post that he thought "the government should be run like a great American company," and should "achieve successes and efficiencies for our customers, who are the citizens." But while that might sound impressive, the fact that Jared Kushner thinks American citizens are customers is actually pretty problematic.

There's no question that success and efficiency and innovation are valuable, and on the surface, it seems to make total sense that those things really would make America great. But no matter how many businesspeople might currently hold positions in the Trump Administration, the reality remains that the government isn't a business. And while Kushner might think it's complementary to consider citizens to be the country's customers — implying that meeting their needs is the priority — he seems to be forgetting that, in a democracy, citizens are actually supposed to be the owners.

In addition to being a trusted senior adviser to the President, Kushner is also Trump's son-in-law. Like Trump, Kushner has no government experience and comes from a real estate investment background, and Trump also seems to consider Kushner to share his self-described talent for business and negotiation. In January, for example, Trump praised Kushner's deal-making ability when he placed him in charge of overseeing Israeli-Palestinian relations, according to The Guardian, and Kushner has also assisted the President with foreign and domestic policy issues, according to The Washington Post, acting as the President's "lead adviser on relations with China, Mexico, Canada and the Middle East." In other words, when it came to finding the right guy to head up an office essentially designed to overhaul government bureaucracy using a Trump-approved business approach? It doesn't seem like Trump would have even considered anyone else.

There's nothing necessarily wrong with that, of course — why wouldn't the President want to appoint someone he trusts to lead what could potentially be an incredibly important office? — but the fact that Kushner and Trump both seem determined to treat their roles as an extension of their own business backgrounds could be something that Americans might want to worry about.

According to The Independent, Kushner and his team have reportedly already hosted "numerous roundtable meetings with executives" from a variety of industries, and have built collaborative relationships with big-name tech leaders, including Apple CEO Tim Cook, Tesla founder Elon Musk, and Microsoft co-founder Bill Gates. While it still has yet to become clear what the intention behind those meetings was, or what Kushner's plan will be, the fact that Trump's proposed budget has already indicated a huge cut in federal funding to government research agencies like the National Institutes of Health, the Department of Energy, the U.S. Geological Survey, the Environmental Protection Agency, and the National Oceanic and Atmospheric Administration, according to Science, it's not unreasonable to assume that under Trump and Kushner, private companies might expect to be assuming a role that government agencies may have historically performed.

From a business perspective, that might make sense — after all, if privatization can save money and serve the budgetary bottom line, then wouldn't that be a good thing? But unlike a company, the government's priority isn't supposed to just be about dollars and cents. And when you have millions of citizens whose needs will likely not always be served by doing what can be seen as financially prudent from a business perspective, running the country like a business inevitably means that an awful lot of Americans are going to fall through the cracks in Trump's America.

The notion of running the government like a business is certainly not new, and, actually, neither is the concept of treating citizens as though they were customers. In 2013, for example, Michigan Gov. Rick Snyder used the idea to defend his controversial decision to suspend the authority of government officials in Detroit in favor of placing the city under Emergency Management, according to MSNBC, essentially shifting decision-making from a government model into a business one, where the city itself becomes the product. But as MSNBC's Ned Resnikoff noted, the idea that citizens are the government's customers is a totally flawed analogy, and that "[at] its most basic level, the relationship between a business and its customers is anti-democratic."

That's because, no matter how devoted a company is to providing better products or services to its customers, they are still in control, still only offering up choices that the customer can either take or leave. But in a democratic republic, the state is meant to be owned by its citizens, and as Resnikoff wrote, the "task of governance is a collective enterprise in which all citizens are invited—even obliged—take part." In other words, the government's role is not just to make decisions and offer them up whether we like it or not. We vote, participate, run for office, and protest, not because we deserve better service as customers, or a better product in which to place our tax dollars, but because democratic government was always meant to be a collaboration, a vehicle for bringing about what's needed to meet the needs of the citizens that comprise it.

But even if we move away from more abstract ideas about the fundamental role of government, the idea is still problematic. Because for all that can be said about the problems of bureaucracy and the need for streamlining and efficiency, the reality is that, in business, efficiency essentially relates entirely to turning a profit. Yet, the government has long dealt with large deficits, and part of the reason for that is that it is required to spend money on things that aren't profitable or efficient. Need proof? Trump's proposed budget took aim at plenty of things that a business model would be happy to do away with.

According to CNN, Trump's budget has introduced cuts to almost every single agency, with funding to some eliminated entirely. The Department of Health & Human Services took a $5.8 billion hit, while the Department of Education will receive $9 billion less in funding, with 20 programs either eliminated or reduced. The Environmental Protection Agency, saw a 31.4 percent reduction in its budget, a big blow to programs designed to tackle climate change and pollution. The Corporation for Public Broadcasting (which runs NPR and PBS), the Community Development Block Grant (which, in part, funds Meals on Wheels), and The 21st Century Community Learning Centers program, (which provides funding for before- and after-school programs, many of which also provide meals for low-income children) have all seen funding cut entirely, to name just a few.

In doing so, the White House has argued that the money that would be sent to those agencies and programs could be better spent elsewhere, with Trump's Office of Management and Budget Director Mick Mulvaney even going as far as to say that after-school programs that feed kids haven't been shown to improve student performance, as though that should be the primary determinant of their value. And then there's the GOP's proposed replacement of the Affordable Care Act, which in itself carries massive implications for Americans' healthcare, specifically those who are low-income and who rely on Medicaid.

If the government is a business, and the citizens it's customers, then perhaps the budget makes a lot of sense. It would be finding extra funding by taking away dollars from programs that might not keep the country running like a well-oiled machine, or by continuing to fund programs that aren't friendly to the bottom line (or, in the case of after-school programs, which Mulvaney erroneously argued don't have a measurable economic impact). Take money away from that stuff, and maybe you will be a more efficient system, with less bloat, less red tape, fewer checks and balances and hoops to jump through.

But that also unfairly assumes that programs without a clear economic value also do not have any value — yet anyone who has gone without medical insurance, or who has needed any kind of government-funded social program will likely tell you that those programs had immense value. And even if you like the idea of government streamlining or of innovation, hopefully it is still hard to swallow the idea of a government wanting to ignore the very real needs of its citizens — especially those traditionally marginalized or ignored — in order to obtain it.

Hopefully, when Kushner made his comment, that wasn't what he was actually intending to communicate. Hopefully, he really does want to find ways to improve the current system without taking away from the foundational elements that already exist to protect American citizens. But given the already-existing concerns about Trump's budget and the GOP's healthcare plan, it doesn't seem unreasonable to be worried that one of the president's most trusted advisors thinks it's appropriate to think of citizens like customers.