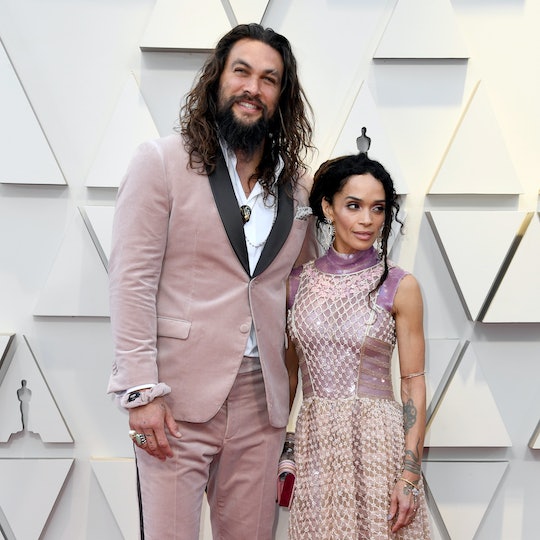 The Academy Awards aren't just about the movies — they're also all about the fashion. One couple might just have stolen the show with their coordinating looks. Jason Momoa and Lisa Bonet rocked pink Oscars outfits, and they both looked amazingly fresh.

Momoa, the Game of Thrones star, wore a blush pink velvet suit with black lapels, while Bonet looked stunning in a pink and purple dress that gave off definite mermaid vibes (which is super fitting for the wife of Aquaman). The outfits were both by Karl Lagerfeld, and according to People, that was no coincidence — the couple wanted to pay tribute the late designer, who died just days before the Oscars ceremony. Lagerfeld reportedly personally designed the suit for Momoa, and he clearly did an amazing job.

But as gorgeous as the suit and gown were, it was Momoa's pink scrunchie that people really went wild for — what's not to love about a Fendi scrunchie that probably cost more than your car? The '90s-esque hair tie was on full display as Momoa presented one of the first awards of the night alongside a pink-clad Helen Mirren, who joked that the two hadn't matched on purpose. Yahoo! Lifestyle noted that it was the actor's first time at the awards show, and between presenting and owning the red carpet, he certainly made it a memorable one.

Let's hope that the amazing scrunchie doesn't overshadow Bonet too much, though, because she looked equally amazing. You almost could have mistaken the 51-year-old for Zoe Kravitz, her equally fashion-minded 30-year-old daughter with rocker Lenny Kravitz. I definitely distinctly remember my mind being blown when I found that Khal Drogo was the stepfather of Leta Lestrange, but Momoa and Benet have been together for well over a decade, according to PopSugar (though they didn't get married until 2017). People reported that the couple shares two kids, a 10-year-old son named Nakoa-Wolf Manakauapo Namakaeha, and an 11-year-old daughter named Lola Iolani.

It'll probably come as no surprise that a couple that rocks matching pink outfits has a pretty epic love story. During an appearance on The Late Late Show with James Corden, Momoa said that he fell in love with Bonet when he was just 8 years old and watching her on TV, according to INSIDER. Back in those days, Bonet was one of the stars of The Cosby Show and its spinoff A Different World.

Momoa didn't get a chance to meet his lifelong crush until 2004, however. They finally met through mutual friends, according to Cheat Sheet, and both said they fell in love right away. Judging by adorable photos like this of Momoa dutifully carrying Bonet's clutch on the red carpet (the nice thing about coordinating is that your partner's clutch will therefore match your suit), that love hasn't faded one bit.

Let's hope these two keep making regular appearances on the red (or dusty-pink-with-hints-of-lilac) carpet together for years to come, and keep bringing their show-stopping style along with them.