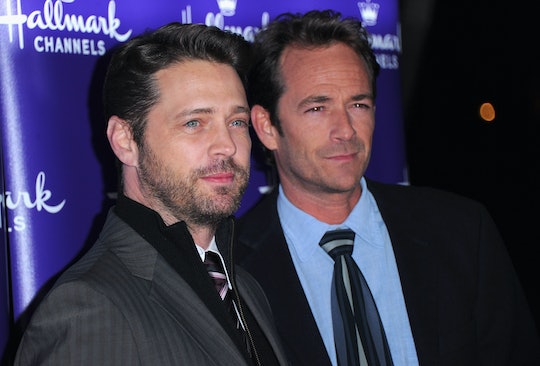 There was a time not so long ago when every girl I knew, including myself, was either in love with Brandon Walsh or Dylan McKay. In fact, I would go so far as to say that for my generation they were the Paul McCartney and John Lennon of school girl crushes. It must have been strange for these men who were still boys themselves at the time to suddenly be thrust into the spotlight like that. A unique experience that certainly bonded them. When Jason Priestley paid tribute to Luke Perry following his tragic death, it was a powerful reminder of just how much these two men have shared over the past nearly three decades of knowing each other.

Perry, the 52-year-old actor who played bad boy heartthrob Dylan McKay on Beverly Hills 90210 from 1989 to 1995, died on Monday after suffering a "massive" stroke, according to the BBC. He left behind two children, 22-year-old son Jack Perry and 18-year-old daughter Sophie Perry. But he also left behind a group of friends who had known him and loved him since he was young — his co-stars on the iconic show that made him a star all those years ago.

One of those friends, his fellow 90210 heartthrob Jason Priestley, took a few days to try to respond to the death of his longtime friend. And on Thursday, he shared a beautiful tribute on Instagram to the man who was his "very dear friend."

Priestley shared two pictures of himself with Perry; one from their 90210 days and a more recent snapshot. In both, Perry has his arm around his friend.

"It’s taken me a couple of days to figure out how to write this... My dear friend of 29 years, Luke Perry, was one of those truly special people who really cared..." Jason Priestley captioned the photo. "Luke was not only a star, he was an incredibly bright light that was extinguished far too soon... and that is why I, and so many others, are in so much pain today..."

He continued, "If you had the good fortune to know Luke, or to have ever crossed his path, I know you are sad today as well... the candle that burns twice as bright only burns for half as long... you burned oh, so brightly Luke... Goodnight Sweet Prince."

Despite the fact that Beverly Hills 90210 ended 19 years ago, in May 2000, a source close to Perry told People recently that the cast remained incredibly close throughout the years. "Years could go by, and if they saw each other or talked to each other, it was like no time had passed," the source said, according to People. "There was a love there that would never ever go away. It still won’t."

Jason Priestley and Luke Perry both moved on with their careers and lives in the decades since starring together in that series. Perry was starring on Riverdale, while Priestley has his own long-running series in Canada called Private Eyes. They had partners and children, lives of their own.

But clearly Priestley felt this shocking loss deeply. It took him days to put together the words to express his feelings. And this, at the end of the day, is exactly what true friendship looks like.