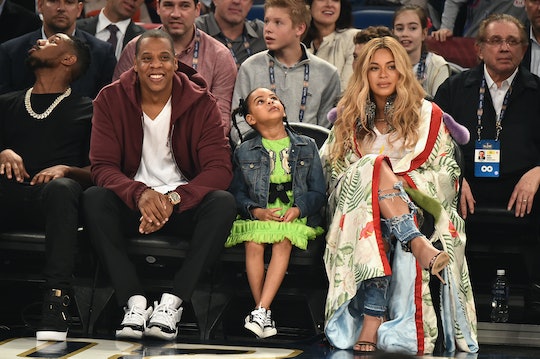 For the first time since Beyoncé gave birth to her twins over the weekend, husband JAY-Z was reportedly seen out in Los Angeles on Monday. TMZ reported that the newborns are still in the hospital due to a "minor issue," but some think it's a good sign that the father of three was spotted out and about and smiling with his entourage yesterday.

People also reported that JAY-Z, who changed his name from Jay Z, was seen arriving at the Ronald Reagan UCLA Medical Center in Los Angeles and was also photographed leaving a Soul Cycle class in Beverly Hills earlier in the day.

"He joined the class just as it started," a source, who was also in the class, told People. "He seemed very cheerful with lots of energy. He kept up with the class perfectly. He seemed to enjoy his workout. When she was pregnant, Beyoncé would come to class with JAY-Z. Today, a friend joined him instead."

From these reports it certainly looks like the 47-year-old rapper is feeling like a proud new dad. However, fans grew concerned about Beyoncé and their new babies after TMZ reported on Sunday that a minor issue has kept them in the hospital for nearly a week and "doctors do not feel comfortable releasing them." While the outlet did not know the nature of Beyoncé or the twins' condition, according to a source, all three of them were expected to be fine.

Also on Monday, JAY-Z's team made a big announcement regarding the release of his new album 4:44, which will reportedly drop at 12:01 a.m. on June 30 for TIDAL and Sprint subscribers, according to CBS News radio affiliate B96.

While it's unclear why his superstar wife and their new additions were still reportedly in the hospital on Monday, his album release date along with reports of him out and looking happy in Los Angeles all point to good news.

It was announced on Saturday that the Beyhive grew by two after multiple news outlets confirmed the exciting news. On Sunday, Beyoncé's father, Matthew Knowles, also confirmed their arrival on Twitter with a photo of colorful balloons, which said "Happy birthday to the twins! Love, Grandad."

"They're here!" he wrote on Twitter, along with #beyonce, #twins, #jayz, and #happybirthday hashtags.

While the babies' actual birthday, their names, or their gender(s) have not been confirmed yet, TMZ reported that a little boy and girl are the latest additions to the Carter family and were born in Los Angeles last Monday, June 12.

But until Beyoncé or JAY-Z make an official announcement about their bundles of joy — hopefully in the form of another epic post on Instagram, as she did with her pregnancy news — the Beyhive will have to sit tight and continue sending over their well wishes.