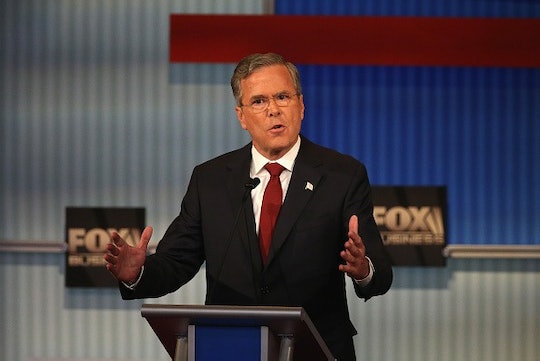 Oh, Jeb, you guacamole-loving Bush, you. What are we going to do with you? In an attempt to sell himself as a man of the people, I guess, Jeb Bush awkwardly chest-bumped a man in Iowa on Wednesday night, and it has since been immortalized in the best Vine... ever? Just wait for it.

MSNBC reports that the bro-down happened after a town hall event in Waukee, Iowa. Shane Blanchard, a city councilman and Dallas County co-chair for Ted Cruz’s campaign, approached Bush to tell him that he was officially over Cruz and wanted to be besties with Jeb, instead. Jeb, in return, thanked him, called him a good man, and then, almost as an afterthought, asked Blanchard for a chest bump. Yes, it was Jeb’s idea. When reporters rightfully asked him what that was all about, he told them, “I do that for every convert.”

This is very important news, guys. We can all get a chest bump if we convert to Team Jeb! I wonder if chest bumps are really available to all converts, though. What about converts with breasts? Is Columba OK with that? What about bedridden converts? Will Jeb come visit you in the hospital and gently lay his torso across yours in the spirit of brotherhood? These are questions we really need answers to, and right away. In the mean time, just loop this video over and over until you find your happy place: