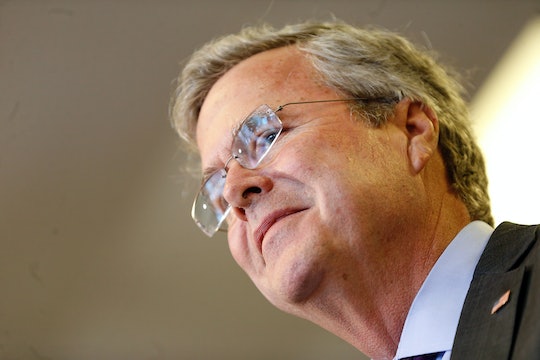 The Republican Party nominees weren't afraid to defend themselves during the Fox Business/Wall Street Journal debate, and nowhere was that more evident than Jeb Bush’s zinger towards Donald Trump. At one point, the former governor of Florida thanked Trump for "allowing" him to speak at the debate and sarcastically remarked on Trump's "generosity." Although the moment can be easily dismissed, it shows that the presidential hopeful is also aware of what we already knew: He easily fades into the background. Though Bush’s admission is refreshing, it still looks like Twitter and everyone else determined that he didn’t do much in Milwaukee to shake it.

During a tense back and forth about immigration, Trump silenced John Kasich by saying "you should let Jeb speak,” a comment that was met with laughter. Though the former Florida governor's dullness has been an elephant in the room, so to speak, tonight feels like the first time that all the candidates (not just Donald Trump) are acknowledging it. Which is great, but it may not be enough for him.

But what is the Internet saying about Bush’s performance tonight? Relentless but honest as ever, Twitter has posted memes and quips about his lackluster performance. Though some people are mentioning a slight change in his personality, many are weighing in that he is still our awkward, cringe-inducing, ol’ Bush.

Just being Jeb has caused a ton of problems in his campaign. According to New York Magazine,  Bush’s campaign backers are having some buyer's remorse. They are hoping something, somewhere gives him that much-needed boost, but his personality isn’t one of those things. An anonymous donor perfectly captured his issue:

Jeb’s just blended into the second tier of the Republican pack. When you run for president, you have to be very charismatic, you have to articulate extremely well and you have to show unbelievable amounts of passion.

And it gets even deeper than that, literally. The Atlantic did the hard work and found that Bush’s voice is off-putting as well. The publication found that he comes off like he is bored as he speaks. And hopefully, for his sake, he does something about it.