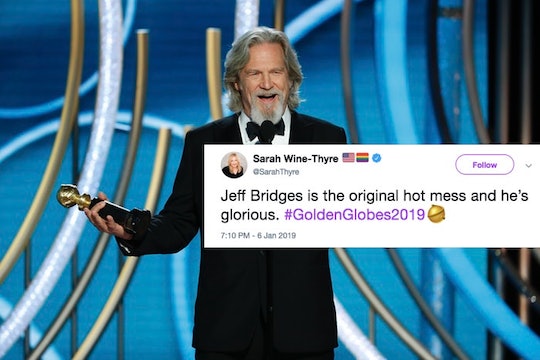 On Sunday night, Jeff Bridges won the prestigious Cecil B. DeMille Lifetime Achievement Award at the Golden Globes. He won for being an incredibly diverse actor with five decades of work under his belt, and how did he celebrate this honor? By going full Dude from The Big Lebowski during his speech. It was a wild ride, and while not everyone loved it, plenty of people thought it was totally in keeping with the man himself. Twitter's general reaction to Jeff Bridges' speech at the Golden Globes proves that most of us get him, and sort of love that he has a tendency to go off the rails.

Bridges has been nominated for five Golden Globes in the past, but prior to his Cecil B. DeMille award he only won once — Best Actor in a Film in 2010 for his performance in Crazy Heart. So you can't really blame a dude for getting a little excited during his speech, now can you? Especially when his Hell Or High Water co-star and dead ringer Chris Pine gave him such a gorgeous intro, as per E! News. The young actor admitted the two bonded over "caftans and Turkish sandals" (as one does) and referred to Bridges as "truly a kind and wonderful gentleman."

Plus, how could anyone expect Bridges not to get fired up when he has such a rapt audience in Pine?

Chris Pine wasn't the only one on the edge of his seat, listening with baited breath for Bridges' speech. He has had a tendency to ramble in the past, after all, and his rambling tends towards the truly magnificent. Now, Bridges started off on rather a normal trajectory. He thanked his father, legendary actor Lloyd Bridges, and his "sweetheart," wife of 30 years Susan Bridges. But after some very sweet thanking came some rather incoherent words of *wisdom*.

Here's a little snippet of Bridges' speech, in which he referenced some confusing story about "trim tabs" on ocean liners that was supposed to be about how individuals can make a difference, as per Entertainment Tonight: "I like to think of myself as a trim tab and all of us are trim tab... It may seem that we're not up to the take, but we are, man. We're alive. We can make a difference. We can turn this ship in the way we want to go, man! Towards love, to creating a healthy planet for all of us. You're all trim tabs! Tag, you're it!

Fortunately, Bridges has some pretty loyal fans who are just happy to watch him do his thing, man.

Kate Hudson even got in on the action and shared a little love for Bridges on Instagram.

Only The Dude, and he's not saying, man.