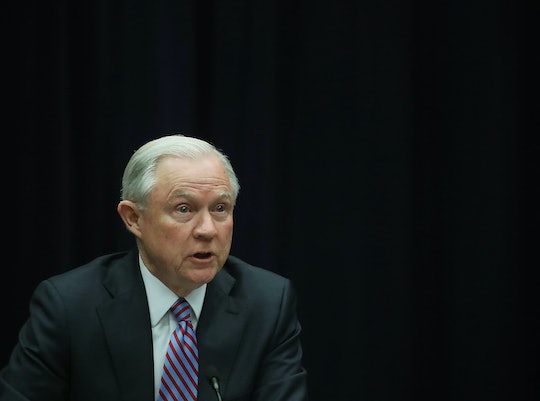 Last week, while criticizing a federal judge's decision to block President Donald Trump's travel ban during an interview, Attorney General Jeff Sessions said he was amazed that "a judge sitting on an island in the Pacific can issue an order that stops the president of the United States." The clap-back from the public was swift, with many Americans (understandably) asking the attorney general to treat the country's 50th state, and its federal judge, with more respect. Sessions' recent excuse for those Hawaii remarks, however, left much to be desired. It also sounded an awful lot like the kind of response minorities receive when they have the audacity to call someone out for their offensive behavior.

On Sunday, when Sessions was asked to explain his "island in the Pacific" comment during an ABC interview, he chuckled and responded, "Nobody has a sense of humor anymore." Romper reached out to the White House for comment on Sessions' statements, but did not receive a response immediately.

The easier — and more polite — move would be for Sessions to apologize for his original condescending language. After all, the United States' separation of powers means that federal courts hold the same standing as both the president and Congress. Sessions' undermining of Judge Derrick Kahala Watson is a dangerous attempt to skew that much-needed balance of power.

On top of that, the fact that Watson blocked Trump's travel ban from Hawaii — rather than from, say, Washington, D.C., or New York — should be irrelevant. Hawaiians (including four of its members of Congress) were right to clap back at Sessions for his belittling of Hawaii. Despite the fact that Hawaii has been a part of the United States for nearly 60 years now, Pacific Islanders still routinely face institutionalized prejudice (look no further than the outdated law that bars American Samoans from being automatically granted citizenship at birth.) And considering that Hawaii is a minority majority state, Sessions' refusal to give it the respect of a legitimate state echoes years' worth of prejudice that treats nonwhite Americans — especially Pacific Islanders and Asian Americans — as "other" or foreign.

Hawaiian Senator Mazie Hirono was right to call out Sessions for his "dog whistle politics" — and so were the many other Hawaiians that spoke up after Sessions dismissed their state so flippantly. Dismissing their ire in a "Can't you take a joke?" way is a tone-policing tactic that trivializes a group's pushback against offensive statements. It's the same response women and other racial minorities (mostly black, latino, or Native American and Native Alaskan) get when they call someone out for disrespectful language or insulting jokes.

So in the eyes of any minority group that has suffered prejudice and discrimination for years, no — offensive, dismissive comments aren't something to laugh off, especially coming from a white man from Alabama. Even if he may not have realized it at the time, Sessions' comment played into a long history of racism and prejudice, and the correct answer to being called out on that would have been to apologize and learn something — not to dismiss legitimate concerns as a "lack of a sense of humor."