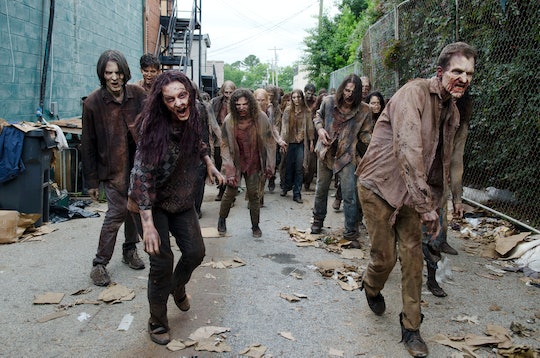 Jeffrey Dean Morgan Joins ‘The Walking Dead’ Cast, & People Are Freaking Out Like Denny Just Came Back To Life

As if the Wolves weren’t enough, The Walking Dead is bringing on Jeffrey Dean Morgan to star as yet another villain: Negan. Fans of the comic book will certainly recognize the name; Negan is the leader of a group of baddies called the Saviors, who steal food and supplies from other survivors. Will they be as bad as the Claimers from Season 4?

SPOILERS AHEAD. Don’t read if you’re not up to date on the show, or if you don’t want to hear about things that have happened in the comics. You’ve been warned. The addition of Negan might provide a clue to Glenn’s fate. According to The Wrap, in the comic books, it was Negan who killed Glenn, beating him to death with a baseball bat wrapped in barbed wire which he calls “Lucille.” Fans (including myself) have been speculating for the last couple of weeks that Glenn didn’t actually die by the dumpster; the guts we saw the walkers tearing at could have belonged to Nicholas, who landed on top of Glenn when they fell.

Also bolstering hope was producer Scott Gimple’s announcement that "in some way we will see Glenn, some version of Glenn or parts of Glenn again either in flashback or in the current story to help complete the story." At the time, it seemed that he was leading us to believe that Glenn was dead just so we’d be caught off guard when he showed up alive. But then Maggie revealed that she was pregnant on Sunday, so now we’re thinking the “version of Glenn” could be Glenn Junior.

But what if Glenn did survive the horde at the dumpster, only to be subsequently killed by Negan? Would they really do that to us? You bet your ass they would. Remember when Beth was kidnapped at the end of Season 4? We finally learned in Season 5 that she’d been forced into servitude at Grady Memorial Hospital, the gang came to save her, and then, once they’re all reunited, Dawn kills her. So yes, they would absolutely bring Glenn back only to have Negan kill him, probably in front of Maggie for maximum impact.

I can’t say for sure when we’ll find out what really happened to Glenn, but I can tell you that Negan will appear in the final episode of Season 6 in April, and will return as a series regular in Season 7. Also coming to the screen from the comic books is Paul “Jesus” Monroe, who will become a “trusted advisor” to Rick. Creator Robert Kirkman told Entertainment Tonight that Jesus is gay, but it’s totally NBD: “I want Jesus to be a character where his sexuality is as unimportant as Rick or other heterosexual characters. So we won't focus on it constantly and it won't be the focus of any big storylines for him... but he'll make it with a dude every now and then... before going out and drop kicking zombies. He's one of my current favorite characters." Great news for Aaron, whose boring boyfriend Eric will probably be eaten soon, since I constantly forget that he’s still alive. Jesus will be played by Tom Payne, who you will notice is not ugly.

In the meantime, you can revel in your Jeffrey Dean Morgan excitement right along with the rest of Twitter, which is definitely freaking out over this news today, too: