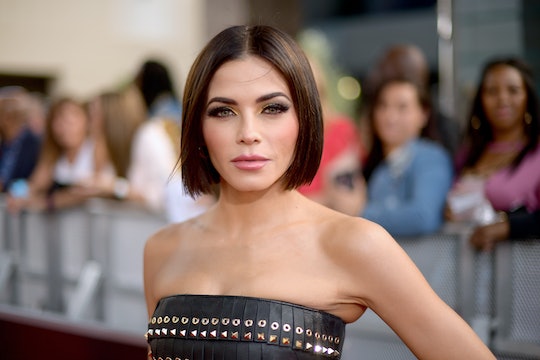 Oh, baby! Someone is getting a big sister. On Tuesday morning, Jenna Dewan announced that she's pregnant with her second child, and expecting her first bundle of joy with her boyfriend Steve Kazee. The pair announced their pregnancy in a statement to People on Sept. 24, sharing that they are "beyond overjoyed" at the news.

"We are beyond overjoyed and couldn’t be happier to be expanding our family!" the couple told People. While the pair have kept their relationship largely out of the spotlight, Kazee has appeared on Dewan's Instagram feed quite a few times over the past year. The expectant parents' bundle of joy will be Kazee's first and Dewan's second, according to Us Weekly. The actress shares a 6-year-old daughter, Everly, with her ex- husband Channing Tatum.

The three of them seem ready to welcome a new addition. Dewan, Kazee, and Everly recently returned from a family vacation at the Montage Laguna Beach, according to E! News. "Jenna and Steve were very relaxed together and looked totally in love," a source reportedly told the outlet. "They were also very much focused on Everly and made their vacation a family one where she was the priority. Steve was amazing with Everly."

The coming baby may be the first human child the two will share, but they adopted a fur baby together over a year ago, according to People. After Ellen DeGeneres announced on her show that she and wife Portia de Rossi adopted a shelter puppy from a local rescue called Wagmor, Kazee posted a photo of himself with his and Dewan's dog, Cosmo, to Instagram, sharing in the caption that he came from the same rescue.

“Ellen is right! Wagmor is awesome!” he wrote.“This time last year, Jenna and I adopted this little fella Cosmo into our family,” he said. “There are so many wonderful resources out there for finding lifetime homes for animals in need. The next time you are looking for a new fur-ever friend, remember to adopt not shop!”

Dewan posted about Cosmo's adoption from Wagmor on her Instagram Story and commented on Kazee's post, saying, “Awwwwwwwwwww. Back when he fooled us and we thought he was chill.” Now, I wouldn't compare the responsibility of raising a child to the experience of taking care of a puppy per se. But Dewan and Kazee are surely comfortable cleaning up poop together by now — and that's a big part of having a baby, in my experience.

Along with taking family vacations and adopting cute animals together, it sounds like the couple has a pretty solid foundation to their relationship. "Jenna and Steve are crazy about each other and have a great relationship," a source told E! News. "He is very mature and there's no drama. It's just easy and comfortable."

Blending families is no small feat, but Dewan and Kazee are already well on their way. I can't think of anything more exciting than a new little brother or sister for Everly and Cosmo. Congratulations, to the happy family!