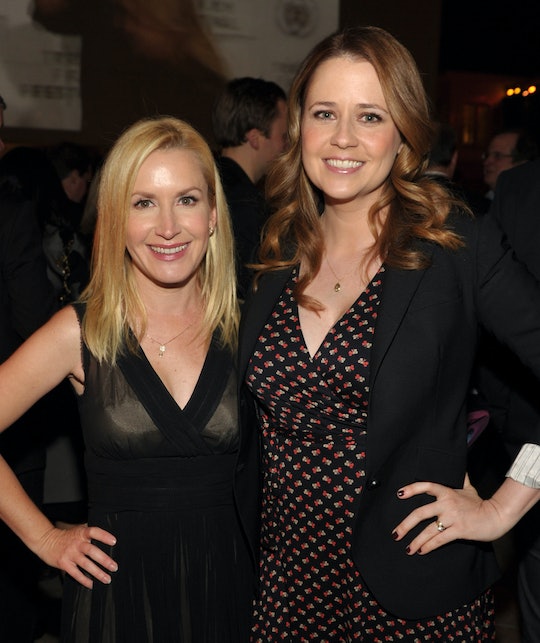 Everybody Stay Calm! Angela & Pam From 'The Office' Are Starting A Podcast

I love The Office. It is still one of those shows I can put on in the background while I'm doing other things and climb right back into the world of all the Dunder Mifflin paper company and the employees from their Scranton, Pennsylvania branch. Despite the fact that I've seen every episode at least twice, there's just something so real about them, you know? Of course you do, everyone loved that show. Everyone misses that show. And now here's your good news for the day, Jenna Jenna Fischer and Angela Kinsey's podcast about The Office is going to do a deep dive right back into the show, so it will be sort of like getting new episodes as told by Pam Beesley and Angela Martin.

Actually that's perhaps not true. If you remember their characters from The Office, you know Angela and Pam had a bit of tension between them (I'm blaming it all on Angela, Pam was a total sweetheart and we all know it). In real life, it turns out Kinsey and Fischer are actual best friends, and to me this is excellent news. Especially since the two women are set to start the podcast "Office Ladies" on Stitcher's comedy network Earwolf. I know, I can't wait either.

The podcast is set to air on Wednesdays starting on Oct. 16, with each segment breaking down an episode of The Office from Fischer and Kinsey's point of view. As Fischer explained in a recent Instagram post, the podcast will bring us closer to these real life best friends in several ways. "Each week we will watch an episode of The Office and tell you all the behind-the-scenes scoop and trivia...the kind of stuff that only two people who were there can know," she shared. "There might be some tangents about our lives, our friendship, our cats and our Target runs."

The fact that real-life Angela is apparently a cat person like Angela from The Office already gives me so much joy, I'm not sure if I'll be able to handle this new podcast. Oh, did I mention that they will also be answering listener questions? Because that's going to be a thing which means maybe fans can finally get the scoop on whether or not Jim Halpert was a sweetheart to his wife Pam or a bit of a jerk as some people on the internet have insinuated.

The Office ran for nine seasons, starting as an American remake of the successful British version of The Office starring Ricky Gervais in 2005 and ending in 2013 if you can believe it. Probably it seems impossible to believe since everyone is still watching it continuously on Netflix, with 52 billion streaming minutes of the show reported by Nielson in 2018, according to CNN.

There is just something about The Office that holds our interest long after the show has ended. A mysterious blend of chemistry that is hard to define. Now with the new "Office Ladies" podcast about to launch, I guess we'll get some clues as to what makes it so special. Although if I find out everyone hated each other I'm going to be livid, just saying.