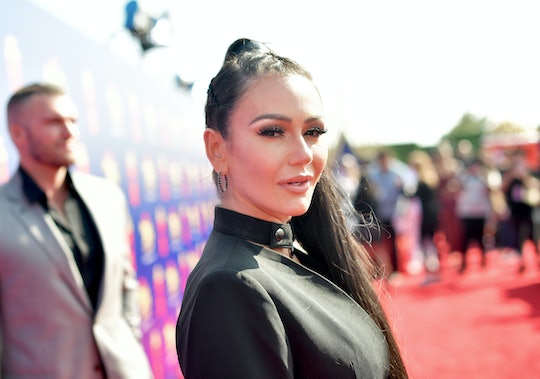 It's no secret co-parenting can be tough, which is why it's so nice to see examples of parents handling the situation with maturity. One shining example? Jenni "JWoww" Farley celebrated her daughter's birthday with her ex-husband and boyfriend, and fans are justifiably impressed with the co-parents because that kind of maturity isn't always easy to pull off.

In 2015, the Jersey Shore star married her long term boyfriend, Roger Mathews. The two welcomed two children together, 5-year-old daughter Meilani, who was born in July 2014, and 3-year-old son Greyson, who was born in May 2016. The couple finalized their divorce in September 2018 due to "irreconcilable differences," according to Us Weekly, and Mathews made it clear in an Instagram video that he had a lot of respect for his ex-wife stating at the time, "My wife filed for divorce, it’s true. I’m just gonna keep it simple. I don’t blame her. There’s no cheating or any dumb s–t, any juicy details."

Of course, as many JWoww fans already know, the couple have not been without drama since their breakup last year. Mathews claimed in December that Farley had a temporary order of protection filed against him, according to E! News, while Farley admitted to Us Weekly that their son Grayson's autism diagnosis had put a lot of strain on their relationship.

Amid all of the ups and downs, Farley started dating wrestler Zack Clayton Carpinello, who was also in attendance at Meilani's birthday party, according to People. And while this might seem unorthodox to some, the family looked relaxed and happy in Farley's Instagram video of the birthday party.

In the video, the couple's son Grayson is curled up asleep in Mathews' lap while Farley carries a birthday cake out to her daughter amid the group singing "Happy Birthday." Carpinello can be seen coming out of the house behind Farley, and honestly no one looked terribly concerned or stressed out. Bravo all around.

After Farley shared the clip, some fans took to Farley's Instagram to praise her for making co-parenting a priority.

"Love that you are smoothly co-parenting these days," someone said. "Good to see Roger & your BF co-exist for kids sake."

Another person commented: "So happy that you can co parent that is Awesome!! .....Happy Birthday!!!"

One fan chimed in: "Co parenting at its best."

It's also worth noting that Mathews is seemingly making an effort to be more supportive of his ex-wife. In May, for instance, he jumped to Farley's defense on social media when she was attacked by critics for supposedly not spending enough time with her children. He took to Instagram to let critics know he wasn't having any of it, captioning a video:

The comments as to who the better parent is, or who spends more time [with] our children are unnecessary. We both love our children emphatically and always will. It takes far more effort and energy to be negative than it does to be positive.

This is such a good example of two people who are simply trying to figure out how to make their new normal work for themselves, each other, and most importantly, their children. It can't be easy, but if Farley and Mathews can celebrate their daughter's birthday together with her boyfriend after everything they've been through, then there's hope for everyone.