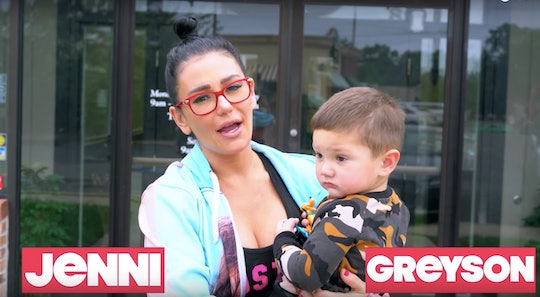 When it comes to kids, a lot of parents can relate to being concerned over their child's development in one area or another. It can sometimes be frightening to reach out for help, but other parents sharing their own journeys to receive help for their kids have helped make the conversation less taboo. Recently, Jenni "JWoww" Farley documented her trip to the chiropractor as a way to help treat her son's speech delay in an eye-opening video.

Best known for her appearance on Jersey Shore and, later, its spinoff Snooki & JWoww, Farley has also become a celeb mom fans love to follow for her refreshing and real takes on parenting. In addition to her son Greyson Valor Mathews, who was born on May 5, 2016, JWoww also has a daughter named Meilani Alexandra Mathews, who was born on July 13, 2014.

Now, with her son 2 years old, Farley has opened up several times over the last couple months about Greyson's speech delay, which she initially revealed during an episode of Jersey Shore: Family Vacation. In early September, for instance, JWoww shared a six-minute video explaining that she wants to share Greyson's journey with her fans for an inspiring reason. "I think sharing stories and educating each other is one of the best ways to break a stigma," she explained in the video.

About a month later, Farley shared in another video sharing that they looking into seeking professional assistance, specifically a chiropractor, to help Greyson overcome his speech delay.

On Oct. 5, Farley shared a video showing her taking Greyson to his first visit to her family chiropractor, Dr. Lynn Bauchiero, to get a pediatric chiropractic adjustment. "She is going to try and give Bubby a nice session because I heard that it actually helps with speech," Farley can be seen saying in the video.

Farley also noted that Greyson also has difficulty understanding a lot of words. "Obviously, having a 2-year-old that doesn't speak and that doesn't understand words, say 'Hey Bubby, we're about to get adjusted,' he thinks it's a game right now," she explained during the video.

It's too soon to tell if this visit will help Greyson's speech, but it's certainly possible that it could. In the past, pediatric chiropractic treatments have been linked to improvements in speech and coordination of children with developmental delays. In fact, research in the Journal of Pediatric, Maternal & Family Health - Chiropractic included a review supporting the role of chiropractic treatments in children with learning and speech delay, as reported by The Chronicle of Chiropractic. As Dr. Matthew McCoy, editor of the journal which published the study, explained, according to The Chronicle of Chiropractic:

Research is revealing that there is a relationship between abnormalities in the spine, the nervous system and brain. Basic science research shows that the proper development and function of the brain relies on proper structure and movement of the spine from an early age.

As previously stated, Farley has opened up about her son's speech delay before. On Jersey Shore: Family Vacation, Farley first revealed to her roommates that her son had just turned 2 and still wasn't speaking. After doing so, Farley shared a picture of her cuddling Greyson on Instagram, captioned:

As a mother, I will go to the moon and back for my kids... no question. I live my life differently because of them. To find out Greyson is “behind” or “delayed” crushed me... but only for a moment... that moment came from wanting to have “perfect children” and “how could this happen to me?”... but Grey is PERFECT and it CAN happen to anyone.. I saw that last night when the messages came in by the hundreds. I decided to share that side of my family on Jersey Shore because I want to help anyone going through what I’m going through... I’m sure people need support the way I’ve needed it. Greyson is still in therapy 3x a week... he’s doing a lot better.

Moms have loved Farley's recent openness, taking to social media to comment underneath her recent video, with some even sharing their own experiences.

"Our son wasn't talking at 2 & 1/2 yrs. He would motion with his hands and make sounds. With the right pre school and proper help, you would never know he had any issues. There is hope and wonderful help out there. Praying for your family," one user commented.

"All the best for you & your son. You’re a REALLY really good mom," another commented.

"You're such a great mom. Love seeing all of Bubbys updates and progress. My son is 5 and we have taken a similar path but have not tried a chiropractor. Looking into this! He is verbal but his overall language is what we're working on. I promise it will get better and better," one fan said.

Watching JWoww interact with Greyson, it's easy to see how much love she has for her child. Opening up about children's developmental delays can be really hard, but Farley's willingness to share her own journey is refreshing, enlightening, and certainly appreciated by fellow parents.