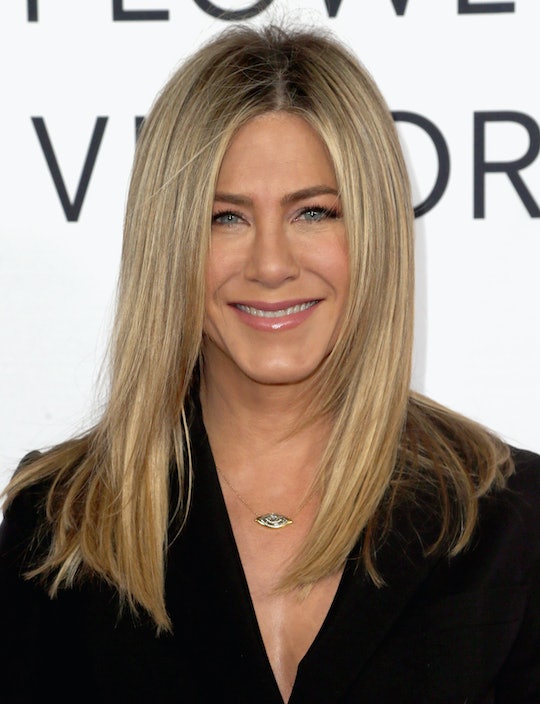 Vanessa Bayer has been bringing Friends' Rachel Green back to TV on Saturday Night Live in the best way possible, with the signature Rachel haircut and 90's overalls to boot. But when Jennifer Aniston appeared on SNL's Weekend Update to interrupt her counterpart, it reminded everyone why they loved Rachel so much when she was on Friends. You know, the real Rachel. On Weekend Update, Bayer was portraying Rachel as she has so many times before, poking fun at the way Friends, as any other sitcom, would cut away and start new random scenes after showing generic outdoor shots, when Aniston popped in and surprised everyone.

She let Bayer down gently, telling her that her portrayal of the 90's hair icon was just too much, too whiny, and basically to give it a rest. She also pointed out how, in her opinion, it probably isn't all that relevant to even be playing the character anymore. "You know, Friends was like 5 million and five years ago," Aniston said on SNL's Weekend Update. "I think we've just got to move on."

That's probably not going to happen anytime soon, though, since Friends is kind of timeless and seeing Aniston make a surprise appearance on SNL just reminded everyone why they love Rachel Green in the first place.

On December 9, Aniston and Bayer will co-star in the raunchy comedy Office Christmas Party along with fellow SNL player Kate McKinnon, and Aniston faux surprised Bayer under the guise of addressing the fact that since filming together, Bayer had taken a particular liking to her. At the end of their appearance on Weekend Update, Aniston offered to take Bayer out for nachos and all was right in the world with two Rachels hanging out like old gal pals.

Bayer's Rachel on SNL has always been pretty spot on, with the accurate mannerisms and that hair that Aniston has said herself before that she now hates, but having more than one Rachel on Weekend Update on SNL was a surprise for Friends fans everywhere. In Aniston's appearance on SNL, she pointed out that Friends has been over for more than 10 years, but does that really matter to viewers at this point? There's a reason why Nickelodeon plays several episodes of the show every single night. There is no such thing as too much Friends or the show being outdated, and there will never be such a thing as too much Rachel.