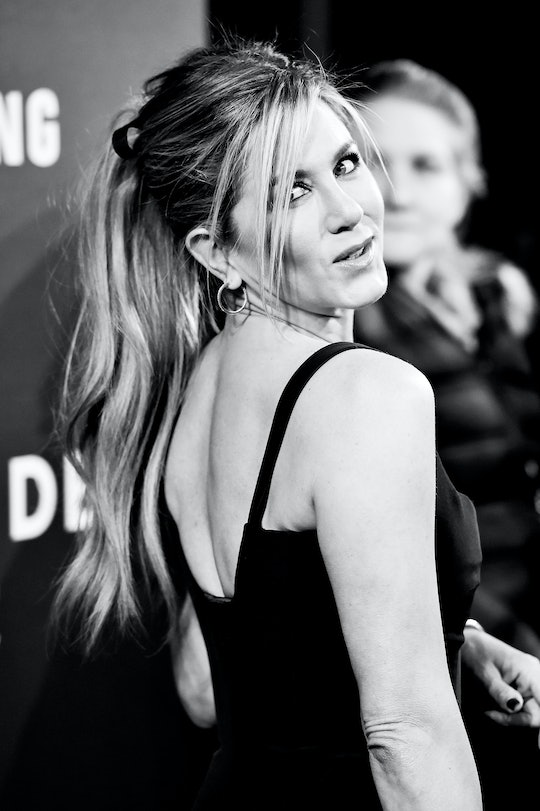 There are some bits of information some of us might like to glean from Jennifer Aniston: What is the exact combination of highlights/lowlights she uses to create that hair color? What sort of scripts does she get to read and does she have a little reading alcove in her beach house wherein she might ruminate over said scripts? Does she really use the Aveeno products? These questions, Aniston might agree, are fine. But this whole thing with the media constantly speculating on her pregnancy? Not so much. Because Jennifer Aniston isn't pregnant, and she recently wrote an editorial for Huffington Post speaking out in defense of women and their choices... and the rumor mill that both judges and maligns them for everything they do.

How many years has the media been speculating about Aniston's possible pregnancy? According to the actress, this last bout of rampant speculation is about "the bajillionth time" and she's pretty much over it. In a thought-provoking, eloquent piece the actress (best known for her roles in Friends and Horrible Bosses) penned for the outlet's blog, For The Record, she addressed the pregnancy rumors, body shaming, and the need to allow women the ability to "determine their own happily ever after."

While Aniston, who is married to actor/screenwriter Justin Theroux (Zoolander Two), admits she doesn't usually like to address gossip, she felt it was time to take a stand:

For the record, I am not pregnant. What I am is fed up. I’m fed up with the sport-like scrutiny and body shaming that occurs daily under the guise of “journalism,” the “First Amendment” and “celebrity news.”

Aniston has long been a mainstay on the gossip pages, and most recently, gossip magazine In Touch published photos of her showing her in a bikini with a small "bump," which had people making two decisions about her: Either she's pregnant or she's "getting fat."

Aniston points out in her article that there are a multitude of problems with this sort of objectification:

If I am some kind of symbol to some people out there, then clearly I am an example of the lens through which we, as a society, view our mothers, daughters, sisters, wives, female friends and colleagues. The objectification and scrutiny we put women through is absurd and disturbing. The way I am portrayed by the media is simply a reflection of how we see and portray women in general, measured against some warped standard of beauty.

As a woman working in an industry largely based on the external, Aniston is especially aware of public perception. She went on to write:

This past month in particular has illuminated for me how much we define a woman’s value based on her marital and maternal status. The sheer amount of resources being spent right now by press trying to simply uncover whether or not I am pregnant (for the bajillionth time... but who’s counting) points to the perpetuation of this notion that women are somehow incomplete, unsuccessful, or unhappy if they’re not married with children. In this last boring news cycle about my personal life there have been mass shootings, wildfires, major decisions by the Supreme Court, an upcoming election, and any number of more newsworthy issues that “journalists” could dedicate their resources towards.

On the subject of whether or not she will eventually become a mother, Aniston wrote that she "may become a mother some day" and that "since [she was] laying it all out there, if [she] ever [did], [she would] be the first to let you know." But, she added, she wasn't in "pursuit of motherhood" because she felt "incomplete," the way society would have people think women are supposed to feel without children.

"From years of experience, I’ve learned tabloid practices, however dangerous, will not change, at least not any time soon," she said. "What can change is our awareness and reaction to the toxic messages buried within these seemingly harmless stories served up as truth and shaping our ideas of who we are. We get to decide how much we buy into what’s being served up, and maybe some day the tabloids will be forced to see the world through a different, more humanized lens because consumers have just stopped buying the bullshit."

While most of us are not celebrities stalked by relentless paparazzi, Aniston's words still ring true on a very human level. The level of judgment many women are often exposed to, all based on their choices (married? mom? how many kids?). As Aniston wrote, "we get to decide" — decide what "beautiful" means to us as individuals, decide what happiness might look like from our own lens. Nobody needs permission to define their own lives.

Thank you, Jennifer Aniston, for reminding us of the truth right in front of our own noses.