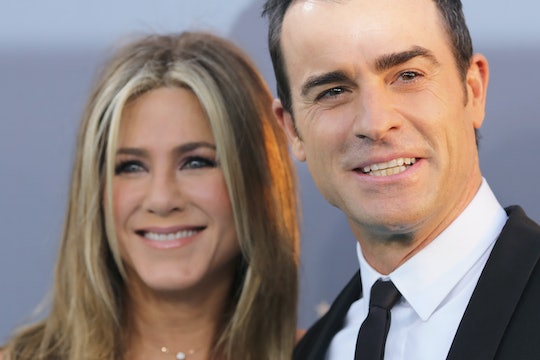 There's sad news in Hollywood today as Jennifer Aniston and Justin Theroux announced they're separating after nearly seven years together. In a joint statement to the Associated Press, the couple said the decision was mutual and that it happened before the new year. The two stars also made sure to include that, though they would have preferred to handle their separation privately, they chose to "convey the truth directly," which basically means they wanted to beat the tabloids to the punch. They also added that they contain to have love and respect for each other as they part ways.

E! News reported that Aniston and Theroux's full statement read that, "In an effort to reduce any further speculation, we have decided to announce our separation. This decision was mutual and lovingly made at the end of last year. We are two best friends who have decided to part ways as a couple, but look forward to continuing our cherished friendship." Romper's requests for comment from both Aniston and Theroux's reps were not immediately returned.

More of the statement released to the Associated Press by Aniston's publicist Stephen Huvane reads, "Whatever else is printed about us that is not directly from us, is someone else’s fictional narrative. Above all, we are determined to maintain the deep respect and love that we have for one another."

According to People, the announcement of separation comes just a few days after Aniston celebrated her birthday apart from Theroux. The former Friends star rang in her 49th birthday in Malibu, California alongside a group of friends that included Courteney Cox, Andrea Bendewald, Leigh Kilton-Smith and Kristin Hahn. Meanwhile, Theroux has been spotted in New York, across the country.

TMZ reported that on Tuesday, Feb. 13, Aniston was photographed at comedienne Amy Schumer's wedding without Theroux, which many thought was definitely a sign something was up. The next day, on Valentine's Day, TMZ posted a photograph of Theroux packing a ton of luggage and miscellaneous items in an SUV outside the New York City apartment that he and Aniston have shared. It appears that all signs were pointing to divorce.

Rumors had been swirling about the couple for weeks, but nothing was confirmed until today, on Feb. 15. The couple started dating in 2011, became engaged in August 2012 and then married three years later in a secret ceremony in August 2015, according to People. Aniston first met Theroux on the set of the 2008 movie Tropic Thunder.

This was Theroux's first marriage, though he previously was in a relationship with hair stylist Heidi Bivens for 14 years, as reported by People. The ex-couple broke up in 2011, just before Theroux started dating Aniston. As for Aniston, the New York Daily News reported that she was previously married to Brad Pitt from 2000 to 2005 and they first began dating in 1998. After her divorce from Pitt, her more notable relationships were with actor Vince Vaughn and musician John Mayer.

Coincidentally, Aniston's ex-husband Pitt is also currently going through a split from wife Angelina Jolie, according to E! News. But, for those Aniston-Pitt shippers out there, this doesn't mean the two will be getting back together, no matter how hard Twitter wishes this theory would come true.

With Aniston being shown hanging out with lots of women lately, she's probably taking some healing time with her girlfriends. She's also made it cyrstal clear on many occasions that relationships don't define her or any woman. While this is undoubteldy a difficult time for Aniston, she's proven time and again that she's a strong, independent woman who tells her own narrative.