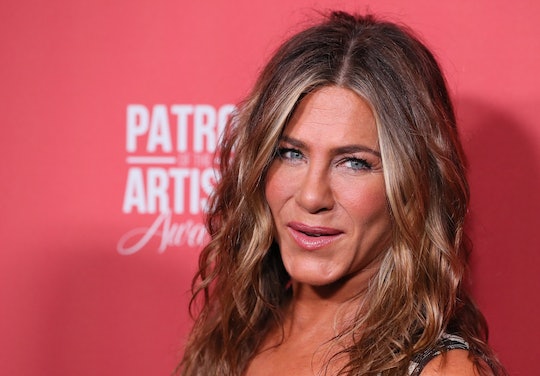 Jennifer Aniston Put Out A Literal Fire At The Emmys, Thanks 2020

Here's something I promise you that you've never seen at a glitzy awards show before — Jennifer Aniston putting out a fire at the Emmys. Literally, the Friends actress had to use a fire extinguisher and put out a little trash can fire. And if you thought this year couldn't get any more bizarre, now you know you're wrong.

Aniston joined 72nd Primetime Emmys host Jimmy Kimmel in an empty Staples Center in Los Angeles, California on Sunday night to hand out the first award. As if it wasn't strange enough to watch Kimmel give his opening monologue in front of a fake audience due to COVID-19 restrictions, things got real when he opened the envelope containing the winner for Lead Actress in a Comedy Series (which went to Catherine O'Hara for Schitt's Creek by the way, all hail Moira Rose).

The Live! With Jimmy Kimmel host attempted a bit of a joke by spraying the envelope with Lysol, then lighting it on fire to disinfect the envelope before touching it. Aniston was on hand to put out the fire. Except it wouldn't be put out. It kept going. And Aniston, who has also been nominated for an Emmy for her performance on The Morning Show, just handled it with her fire extinguisher.

While it was unclear whether or not the bigger fire was part of the joke, it did seem pretty fitting for 2020. After a year of dealing with lockdowns due to the unprecedented coronavirus pandemic, wildfires raging throughout California, Washington, and Oregon, and protests in the street against centuries of systemic racism, a superstar like Jennifer Aniston fighting a trash can fire is obviously the least of anyone's problems.

But you have to admit — you've never seen anything else like that at the Emmys. Especially since Aniston had to fight her small fire in the trash can while wearing a floor length black gown and heels. I bet she had no idea she would be fighting fires in her designer gown when she was taking photos from home in pajamas and a little mud mask earlier in the day.

I guess that's the lesson here, isn't it? You just have no idea what to expect. Also always wear a mask.