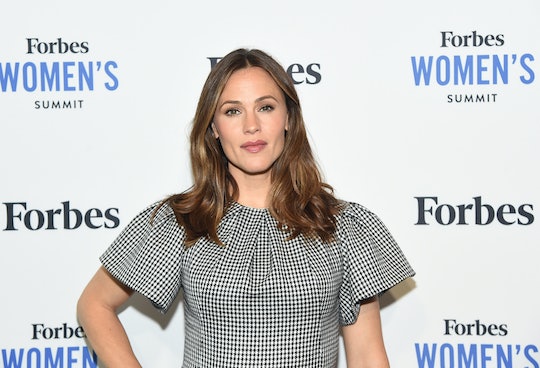 I'm going to tell you now that I work from home and this means all the coffee in the world plus sweatpants every single day. It's a blessed thing, particularly the sweatpants. I don't want to promote too much of a cliche here, but I think most moms out there have a secret, deeply rewarding relationship with their sweatpants. And for those of you who don't understand, please watch Jennifer Garner pay homage to her sweatpants in this new, hilarious video and consider this Exhibit A.

Of course, Jennifer Garner might not seem like the sort of woman to spend loads of time in her sweatpants at first glance. She is an actress, after all, which is considered to be a pretty glamorous gig what with all the awards shows and such. But there's another side to the Peppermint actress as well and that side is named "Mom."

Garner and ex-husband Ben Affleck are parents to three kids together, 13-year-old Violet, 10-year-old Seraphina, and 7-year-old son Samuel. And as a mom of three, Garner doesn't seem terribly interested in spending a lot of time doing makeup and getting dressed up. On the contrary, she is attached to her sweatpants in a way some might find slightly surprising.

In the video she posted on Instagram this week, Garner is packing for a trip and she needs to make a difficult decision: Which of her sweatpants to pack (I wish I could remind her that if she rolled them she could fit a whole bunch more in but that's neither here nor there I guess). She speaks to each pair in turn in her Instagram video, muttering, "Who gets to come? Who hasn’t been in a long time and feels like they’re the right choice? It’s you. I can’t look at them. It makes me feel too bad."

Ultimately, she chooses a navy pair, kisses them, then picks another pair as back up. "You can come, too," she says.

Perhaps she needs to pack sweatpants for another backyard camping trip with the kids, just like the one she documented on June 29 when she shared a morning selfie huddled in her sleeping bag and captioned the post: "Backyard campout. Kids still sleeping. Sprinklers. #whencanihavecoffee #chickensareloud."

At the beginning of this year, Garner was chosen to be on the cover of People's The Beautiful Issue, and she admitted even then that she and her kids were just all happier when she was hanging out at home in sweats. "My kids are so relieved to see me take my makeup off and put glasses and sweatpants on," she told the magazine. "I guess that doesn’t really count as feeling beautiful! It is more like feeling wanted and loved for being me, which is even better."

I remember a time when I felt like wearing sweatpants meant I was giving up on life. That I wasn't even going to try to feel beautiful any more, that I was done for. But now, like Garner, I'm starting to see my sweatpants as representatives of my active choice to be myself. That it's not about giving up, it's about giving yourself a break. So kiss those sweatpants, everyone. They deserve it.