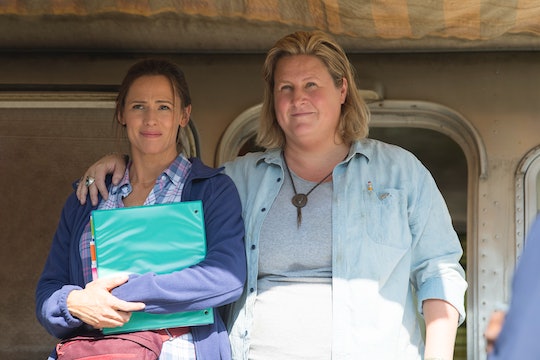 We all know Kathryn McSorley-Jodell.

Name doesn’t ring a bell? That might be because she’s a work of fiction – the lead character in HBO’s Camping, which premiered on Sunday, Oct. 14. But even though she’s only there inside of your television, you’re sure to know her in real life. Or at least someone who emulates the woman who makes HBO’s Camping such a hit, as she’s portrayed by Jennifer Garner.

Kathryn is the archetypical helicopter mom. The one who won’t let her child even watch a touch football game without wearing a helmet, and subsequently bundles him off to the ER when he takes a tumble on the sidelines. Thanks to Garner’s portrayal, even if that mom is your nemesis IRL, you’ll find yourself pulling for her in this new comedy from the brilliant minds of Lena Dunham and Jenni Konner.

[Television is] such a happy, joyful experience to me, to have a community that’s ongoing. I had been looking for a half-hour comedy to do, so I read this script, and fell completely in love.

The show, an adaptation of the British original, relays an unforgiving depiction of the uptight WASP-y suburban mom via Garner. The fact that this sweetheart of an actress and mother of three is essentially playing a “campy” (excuse the pun) version of her own public persona isn’t lost on her. She admits, for example, trying to “plan her nuts off” for every family vacation. It’s that exact implicit wink of acknowledgement in the casting that makes this show so utterly watchable.

Garner, for her part, takes a doggedly trying-to-find-the-best-in-everyone approach to her character’s cringe-worthy antics.

"Poor Kathryn is just exhausted,” she told USA Today’s Patrick Ryan. “She’s exhausted from being expected to be something she can’t be anymore and hasn’t been able to be for a long time." In another interview, she reasoned that everyone has a story, even Kathryn with her off-the-charts rigidity. As she noted to Paste’s Garrett Martin, “I think you know that someone who’s living with chronic pain and feels completely misunderstood by everyone from her normal life…I think it must make you feel kind of crazy. And she probably started off being really controlling and tough to begin with.”

Camping marks Garner’s first appearance on the small screen in 12 years, but she says she always knew she’d “go home to” television. She “flipped the script” after shooting her action revenge movie, Peppermint, to journey out into the woods for this ensemble vehicle. “[Television is] such a happy, joyful experience to me, to have a community that’s ongoing. I had been looking for a half-hour comedy to do, so I read this script, and fell completely in love,” Garner told Romper when we chatted about her new series over the phone.

After all, Garner does share a few similarities with her new TV alter ego: She’s gung-ho for the outdoors, for example. Garner’s own family regularly vacationed on a boat in the Chesapeake Bay when she was growing up, and she cites this as the locale for what might be her own best story of a carefully-planned adventure with more than a few flaws.

“I have been on so very many trips gone horribly wrong, but one that comes to mind is a boat trip with my family,” Garner told Romper, opening up about her own personal cringe-worthy memory. “The [toilet] had to be dumped into the ocean by hand every few days. One time the base of the head was ripped from my dad’s hand as he was emptying it.”

So, what did the Garner family do? Pack it in and head back to civilization? Not in the least. “We peed in a bucket for a week,” she recounts.

It’s a good thing Garner doesn’t require the Fabergé egg treatment that Kathryn does, because she’s famously one working mom who keeps up a breakneck pace both inside the home and out. Her action-revenge movie, Peppermint, premiered on Sept. 7, just weeks she received her star on the Hollywood Walk of Fame. That itself came shortly after a late-summer trip to Sweden with her eldest daughter, Violet, 12. Garner, who has very publicly been in ex-husband Ben Affleck’s corner through various trials and tribulations, recently finalized her divorce from the actor.

She’s also heavily involved in Once Upon A Farm, the organic foods company in which she became a partner not long ago. A discussion of her work with the brand lays bare an area in which she differs dramatically from Kathryn — her approach to family meals.

“I try to make mealtimes enjoyable and stress-free. Just a time to connect as a family over food,” says Garner, who’s mom to Seraphina, 9, and Samuel, 6, in addition to Violet. “I regret every time I counted bites or forced the issue. Kids do not eat on our schedule. Low stress is best.”

Some things aren’t so different, though. She says that the fresh, cold-pressed, additive and preservative-free pedigree that the smoothies and other foods produced by Once Upon a Farm bear, and which she is so proud to represent, would definitely pass muster with her character.

“But Kathryn would be coming at it in a Type A, ‘This is good for you, dammit!,’ kind of place,” Garner chuckles. “Luckily, Orvis (the Jodells’ son, played by the adorable Duncan Joiner) would be into Once Upon A Farm, for sure.”

Wouldn’t you just know that “that mom” has a son named Orvis. In this and many other ways, Garner’s Kathryn turns up the volume on upwardly-mobile white mom angst to a full 11. This time you’re not stuck at the typical PTA meeting with her, and thanks to Garner, you’ll enjoy the ride.