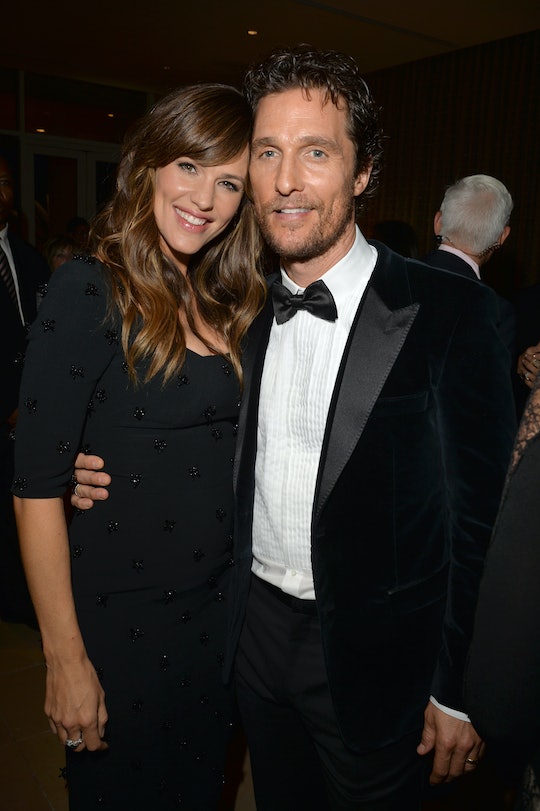 New moms trying to pump at work need allies. And in a recent interview with PBS' Kelly Corrigan, Jennifer Garner revealed that Matthew McConaughey was a pretty amazing one to her while filming the 2013 Oscar-winning film Dallas Buyer's Club.

In her interview with Corrigan, Garner explained that she had just given birth to her third child with now ex-husband Ben Affleck, son Samuel Garner Affleck, in February 2012, when she started filming Dallas Buyers' Club with McConaughey. The busy mom had taken some time off work to raise her kids and be with her family, but when her agent told her about the movie she said she took it because "it was time for me to go back to work."

She was still breastfeeding Samuel at the time, and told Corrigan that there was "never a 10-minute break" in the hectic filming schedule for her to pump her breast milk. A situation that was not ideal for her mentally or physically.

"My boobs were freaking out," she said. "It was bedtime, and we were doing some scene that was supposed to be light, and I started crying and I was like, ‘I have to quit. I have to go home and be with my kids. I just can’t do this anymore.'”

Instead of turning a blind eye to her suffering, McConaughey stepped in. As Garner told Corrigan, "Sweet Matthew McConaughey pulled me aside and said, ‘What is going on with you?'”

When she told him she needed to pump, he had the crew take a break to give her the time she needed. And what's more, kept it up throughout filming. "Whenever I needed to, I would give him a hi sign and I would go take care of it," Garner went on to say. "He said, ‘You can do both. You’ve got it. You can do it.'"

The two friends had worked together before on the 2009 rom-com Ghosts Of Girlfriends Past, and McConaughey told Syfy in a 2012 interview that he already had so much respect for Garner. "One thing that I liked and thought 'This is really going to work' with you and I is that she doesn't bring any riff-raff, fizzle-fazzle, extra BS drama from the outside, and she's a complete pro and still fun and coy and keen and jokey," he told the outlet.

Matthew McConaughey's support of Jennifer Garner pumping on set is another reminder of just how important allies are for breastfeeding moms in the workplace. They need breaks and privacy and people who try to understand what an emotional time it can be. No wonder she told Corrigan in her interview, "How much do I love that guy? I know, a lot." Us too, us too.