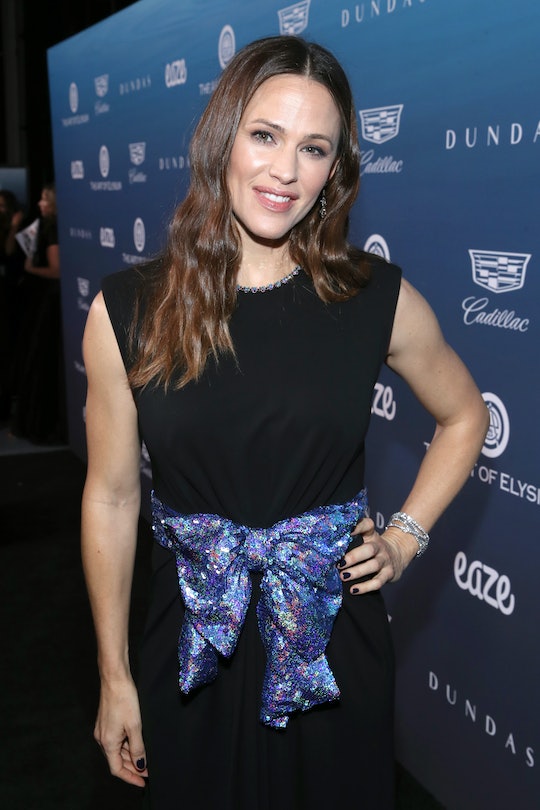 Daylight Savings sounded simple enough to me when I was a single person. You change your clock, and get up and go. But when you're a busy parent, the time change is complicated business. Jennifer Garner's Instagram about Daylight Saving Time will make every busy woman relate.

As the actress and mom to Violet, 13, Seraphina, 10 and Samuel, 7 (who she shares with ex-husband Ben Affleck, as the Daily Mail reported), documented on social media that when it comes to setting your clock forward, the struggle the following morning is super-real.

As CafeMom reported, Garner hilariously showed a multi-photo post tracing her progress through the first morning after all of us, for whatever reason, agreed to set our clocks forward one hour, thereby losing one never-to-be-gained back, golden hour of sleep.

The results were so relatable, as Garner is seen trying to put a cooling treatment in her eyes, dozing in the car, and looking super-sleepy in a not-ready-for-camera ponytail.

"Daylight savings has me like... #cantspringforward #clockinginata5 #sadisticassistant #buttofthejoke🙋🏻‍," she wrote, clearly having been snapped dozing by a mischievous personal assistant.

Garner, who mentions having to be at work by 5 (a.m. I assume), struck a chord with her many fans, generating a couple hundred thousand likes.

Fans, many of whom seem to be moms juggling fatigue as well, were compelled to add in their own comment.

"Monday am was really really rough as we got the kids out the door for school," wrote one fan, while another talked about having a baby that's getting molars and teething, which will surely not be helped along by a schedule change.

A third user noted that having a teenager grumbling about being tired required a compassionate response from a just-as-weary mom.

Another fan commented on why I think Garner has such a big social media following: "You are so real. That’s what’s so wonderful about you❤️," added the user.

Garner has always juggled a number of film and TV projects while raising her kids, as well as in her pre-kids days — she had great supporting roles in such critically-acclaimed dramas as Dallas Buyers Club and Juno, and, of course, starred in films such as 13 Going on 30 and on Alias.

Recent months have included comedic postings on dressing up for her son's birthday party, much to his disappointment, trying to "Marie Kondo" her junk drawer, and getting up crazy early to bake her kids treats before school, all the while in her jammies.

People love Garner, I think, because she manages to be positive about her fabulous life and her celeb connections (like Reese Witherspoon and also Juliette Lewis, her co-star on her current show, HBO's Camping) without going over the top into bragging.

She seems to have the came challenges as any other working mother, (such as dealing with the time change) and juggles them with a wink.

I also personally like the way she includes the kids in her public life, but not in such an overt way. For example, her kids' faces aren't all over her social media accounts, and are rarely glimpsed on the red carpet, but she lets us see their personalities through cute notes and pictures.

And while we didn't hear this time regarding just how difficult it was to drag her three kids out of bed and get them to school following the time change, every parent knows what a nightmare the Monday morning after you change your clocks can be. I'm sure Garner was in the exact same boat and could easily relate — just like parents always can to her funny posts.