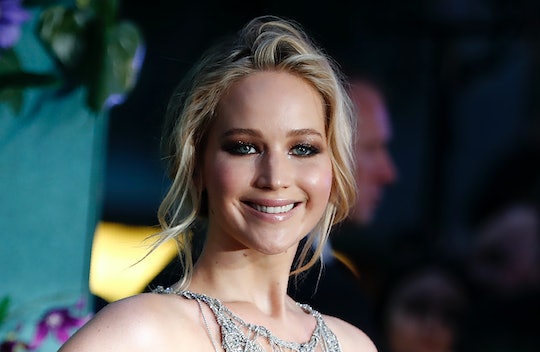 J.Law Isn't Feeling Motherhood As She Gets Older, It's "Starting To Worry Me"

Jennifer Lawrence's new movie, Mother!, is giving me nightmares just from the trailer. And I'm not the only one, apparently. Even the unflappable actress herself has reportedly had some misgivings about the super creepy movie. In a recent interview with E! News, Lawrence admitted that she's not ready for motherhood; whether or not she is avoiding the maternal pull because of her role in the recent horror movie is still up for debate. Though I'm voting most likely.

Mother!, which was directed by Lawrence's beau Darren Aronofsky — who's also worked on Black Swan and Requiem For A Dream — and co-stars Javier Bardem, Ed Harris, and Michelle Pfeiffer, is already being hailed by critics as the stuff of nightmares. Lawrence plays a pregnant wife to Bardem, whose life in an out-of-the-way home in the woods and things starts to go wonky when her husband continuously welcomes uninvited guests into their home. I haven't seen the movie yet, but I feel it's safe to say it would probably give me nightmares forever. Even Lawrence admitted that she was "shaken" after seeing the movie in its entirety for the first time. She told Variety:

I was really shaken. My first reaction [to seeing the film] was that we took it too far. But then after the images died down a little bit, [the movie’s] exactly what we’re supposed to be doing and what we need to be doing. We have a message and if we watered it down to make people comfortable then what’s the point? Why even make it?

On a separate, yet probably related note, the Hunger Games actress told E! News that she's no longer feels those mommy "pangs":

So is she feeling the urge of motherhood now that she's all of 27? She told E! News:

Not at all. They are actually getting less and less as I get older, which is starting to worry me. I don't think that's how it's supposed to work!

Lawrence seems to have been scared off of motherhood, either by the movie or by the daily, grinding reality that is raising a human being for decades of your life. It's hard to tell.

What's scarier, acting in a movie? Or the day-in, day-out monotony that can feel overwhelming, and you start to sort of forget the person you used to be as your life becomes a revolving door of demands for more food, more drink, more everything. You're a little bit of a player, a stage hand to these small, thankless people you brought into the world.

Yep, the second thing is scarier.

Regardless of her feelings about parenting, Lawrence has no regrets about making Mother! with Aronofsky. She told E! News:

I believed in the metaphor and the message that Darren wanted to get across. When I first read the script I thought it's too dark. I didn't even want the script in my house and then I realized that's why he's a genius. That's why I have always wanted to work with him. He's unafraid. He's bold and I do agree with the message.

Plus, they are each other's person. So that had to be fun.

I totally get why Lawrence isn't dying to become a mom just yet. I have four kids, all of whom I love and all of whom took Herculean amounts of energy to raise up right. Lawrence has got a lot going on, what with being an Oscar-winning actress whom everyone in the world adores et al.

Still, she would have a seriously cute baby, I can tell. So I'm holding out hope that she changes her mind, once the specter of Mother! has released her from its clutches. You just never know.