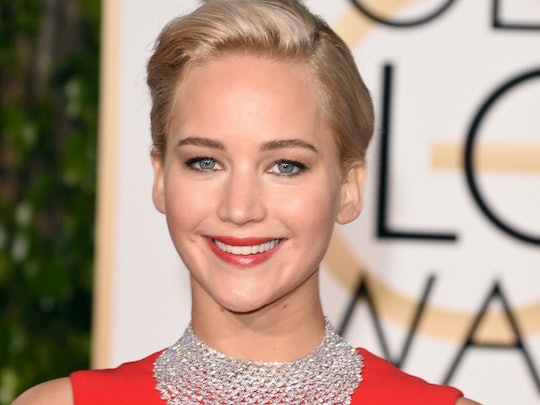 Another day, another JLaw controversy: fans are currently trying to decide whether it was uncalled for when Jennifer Lawrence called out a reporter for using his phone backstage at the Golden Globes on Monday night. According to The Wrap (who has video of the incident), Lawrence initially told the man, "You can't live your whole life behind your phone, bro," during the press conference following her Best Actress win for Joy. "How do you see yourself for the Oscar night–" the reporter began to ask, before Lawrence interrupted him in a patronizing tone: "We're at the Golden Globes; if you put your phone down, you'd know that." Yikes.

While some in attendance have defended Lawrence, claiming that the reporter was taking pictures or or video with his phone, others say that he was actually reading his questions (possibly translated from another language) off of the screen. The footage only shows Lawrence, so it's impossible to say for sure. It was also probably impossible for Lawrence to know what the man was doing with his phone, but he did speak with a noticeable accent, which makes the patronizing way in which she spoke to him even more troublesome.

Will this finally be the downfall of America's sweetheart? It's unlikely. Lawrence has been making awkward remarks that she probably later regrets for years, but she continually skates by because they're all one-time things. Like in her 2011 Rolling Stone interview, when she called herself "dykey" for playing sports as a child. Or in 2012, when she appeared on the Ellen show and joked that she calls her cat "Chaz Bono" because the cat is female, but Lawrence thought she was male. Her comments were just one-offs rather than part of a larger pattern of transphobic comments, so fans mostly forgot about them.

She's also walked a fine line between offhand comments and outright feuds with other celebrities; in 2014, she referred to a gluten-free diet as a "cool new eating disorder," which some thought might be directed at Gwenyth Paltrow (Lawrence was dating Paltrow's recent ex, Chris Martin, at the time). She also recently offended Lindsay Lohan when she joked about her addiction issues, telling Stephen Colbert, "I get, like, Lindsay Lohan-grade exhaustion, but without any drugs or alcohol."

Could this finally be the straw that breaks the camel's back? It's doubtful. Lawrence has a history of putting her foot in her mouth in a clumsy way, and that's all that this seems to be.

She certainly didn't seem malicious when she chastised the reporter, and everyone else in the room was laughing. This isn't the first honest mistake she's made, and it surely won't be the last, and it looks like fans will be happy to forgive her once again. Because, after all, we've all made dumb mistakes; it's just that the rest of us don't have cameras pointed at us all the time. Lawrence is human like the rest of us, but because she is constantly on camera, maybe she'll just try to be a little more careful in the future.