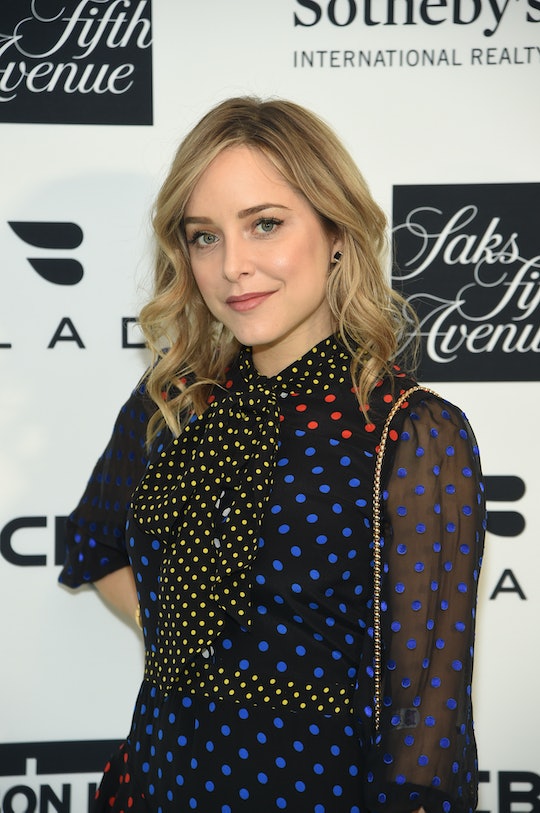 If there's one thing all moms fear, it's dropping their kids. Whether they're tiny babies that can hardly crawl or bigger kids that are constantly all over you, the fright is there that it could happen at any moment. And on Wednesday night, Jenny Mollen opened up about dropping her son on his head recently, and moms everywhere are rallying around her and sending their love her way. The actress shared the news in a candid post on Instagram, revealing that her 5-year-old son Sid suffered a fractured skull, but is thankfully on the mend now.

Mollen posted a photo of herself holding her son, whose face was concealed with heart stickers, while flashing a subtle smile to the camera. In the post, she sent thanks to the doctors at Lenox Hill downtown and New York Presbyterian Hospital in New York City for caring for her son. Mollen said that it had, understandably, "been a traumatic week" following the incident, but that Sid was home "taking things slowly and recovering nicely." She also thanked her husband, actor Jason Biggs, and sent love "to all parents who have or will ever find themselves in this kind of position," adding, "You are not alone..."

"On Saturday evening, I dropped my son on his head causing him to fracture his skill and landing him in the ICU," Mollen wrote on Instagram. "I am forever grateful to Lenox hill downtown and @nyphospital for their immediate response and aid. Thank you to all of the nurses, neurologists, pediatricians, residents, cafeteria staff and brave women that keep the visitor's bathrooms clean. Not sure how this post turned into an Oscars acceptance speech... But @biggsjason Thank god for you! Thank god, thank god, thank god."

It has been a traumatic week but Sid is home now taking things slowly and recovering nicely. He is also eating a lot of chocolate dipped ice cream cones and plans to try cherry dipped soon. My heart goes out to all parents who have or will ever find themselves in this kind of position. You are not alone...

The honest post drew dozens of positive responses from other moms around the world who had been in her shoes before, or simply appreciated her being transparent.

One commenter thanked Mollen for talking about "something that is so mortifying but also so common." Another wrote, "...We are all on the brink of some sort of accident with our kids daily, some of us just luckier than others when it doesn't land us in the hospital."

Another chimed in, "I think every parent I know has dropped their kid or like me banged their head against the doorframe when carrying them to bed!!!! My son is 22 now with no lasting damage...x."

The Office actress Angela Kinsey, a mom herself, also sent love to Mollen, writing that she was thankful Sid was OK, and that it "must have been so scary." Kinsey then said, "As parents we try our best but things can go south in a split second," which is so very true.

Actress Krysten Ritter, who is currently pregnant with her first child, also wrote, "Oh my god Jenny that is so scary and I’m so sorry you guys are going through this. Fast recovery for Sid! Sending love."

Mollen has always been transparent about life with kids, whether it's medical incidents with her children or just the daily trials and tribulations of parenting. A few months ago, for instance, she revealed that her other son, Lazlo, was bitten by a dog on Thanksgiving, sharing the news on Instagram Stories at the time, according to Entertainment Tonight.

"So, Laz was bit by a dog on Thanksgiving," Mollen shared in a video on Instagram Stories, according to People. "He is totally fine. He’s completely OK. I’ve just been having a… mental breakdown over it as a mom. But, tomorrow marks a week since it happened. I have to like pull my sh*t together. I wrote about it, and I’m feeling better."

Mollen previously told Page Six that she doesn't believe moms should hold back when it comes to talking about how hard parenting is, telling the publication "there's no reason to pretend that it's easy." As she told Page Six, "When I see some of these [social media] accounts it always blows my mind that they're acting like they have it all figured out because who has it all figured out? None of us."

Fans have come love and appreciate that kind of transparency from Mollen, even when it forces them to confront something frightening. More celebrity moms should take this approach. At the end of the day, we're all in this together, and seeing posts like Mollen's most recent one about her son's hospitalization is a stark reminder of that. Here's hoping Sid makes a full recovery ASAP, and Mollen's trauma over the incident fades soon.