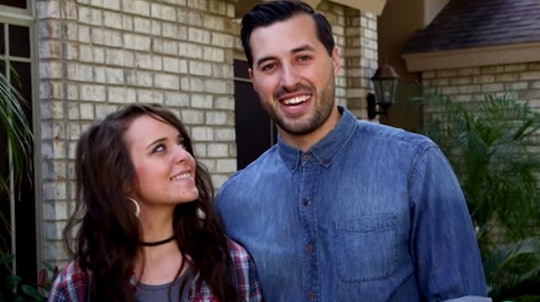 Counting On's Jinger Vuolo is the latest Duggar sibling to announce a pregnancy, but unlike her siblings who announced pregnancies within months of tying the knot, Jinger actually waited to start a family until after her first wedding anniversary. That may not have exactly been welcome news for fans eager to see a Jinger baby update, but now that they have a little one on the way, it sounds like she and her husband are totally ready. In a recent podcast interview, Jeremy Vuolo revealed Jinger's due date, according to In Touch Weekly, and also explained how he and his wife plan to raise their baby with the same strong sense of faith and belief in God that they share.

When Jinger and Jeremy shared their baby news on their official website at the beginning of January, it was a pretty big deal. Not only because it made her the third Duggar sibling to have a baby due in 2018 (Joy and Austin Forsyth are also expecting their first child together, as are Joe and Kendra Duggar), but because many Duggar fans weren't actually sure when — or even if — an announcement might come. Though so far, Jinger's siblings all appear to be following in the footsteps of their ultra-conservative (and ultra-fertile) parents, Jinger has appeared to chart her own course, moving away from her Arkansas hometown to Laredo, Texas, after marriage, wearing pants after being raised to only wear skirts, and possibly choosing to delay getting pregnant (Duggar parents Jim Bob and Michelle have said they chose to stop using birth control after experiencing a miscarriage early in their marriage, but Jinger and Jeremy were married for 14 months before they announced they were pregnant).

From the sounds of it though, that extra time definitely gave the couple a chance to think about their parenting goals. Over the weekend, Jeremy — a church pastor — shared a link on Twitter to an interview he gave to the podcast Calvinist Batman & Friends during the recent G3 Conference in Atlanta, Georgia, and during the chat, Jeremy revealed that Jinger is actually due in July. And when he was asked for his thoughts on how parents can teach their children how to enjoy going to church and worshipping God? Jeremy drew on his own experience preparing for fatherhood, and said he thought it was all about leading by example and putting your marriage first. He said,

Well, I have a family on the way here. My wife is pregnant and due in July with our first. But I think it begins with establishing that relationship with your wife and I think just walking through the word together. If you’re abiding in Christ and walking with Christ daily, I think it can look like sharing that and opening the lines of communication about your own walk with Christ. Where are you wrestling right now? How is scripture helping you? Just opening that communication and fellowshipping with your spouse and that’s gonna translate to your children.

But while the excited couple have only recently begun to share details of their pregnancy — Jinger shared her first-ever bump pic on Instagram Saturday — eagle-eyed Duggar fans (along with, uh, the couple's entire congregation) may have actually already known the reality star's due date. Before confirming the news on social media, the Grace Community Church quietly updated Jeremy's pastor bio to reflect that they were expecting their first child in July, according to Radar Online, making it the first time the couple had shared the date publicly.

Jinger and Jeremy might still have a while to go before their baby arrives, but it's clear they are totally psyched about parenthood. In a video message for TLC following their pregnancy announcement, Jeremy said they were "thrilled" to be expecting a child — though he really hoped their baby would take after his wife. He said,

It's not yet known whether Jinger intends on following in the footsteps of her sisters Jill and Jessa and share the details of her pregnancy on social media, but fans of the couple are no doubt hoping that Jeremy's latest comments are only the beginning of more baby-related updates still to come. Regardless, it looks like Jinger and Jeremy are definitely looking forward to their little one's arrival, and that, this year, they'll be spending their first summer together as a family of three.