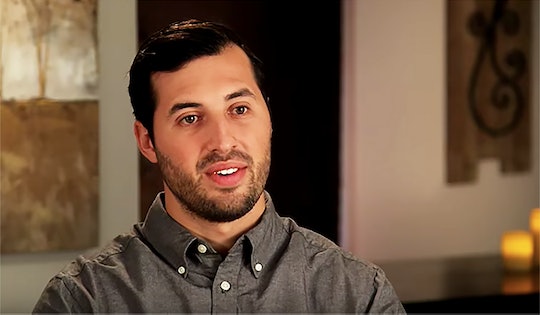 Jeremy Vuolo celebrated his 31st birthday on Wednesday, an occasion his wife, Jinger Duggar, observed with a special gift. But while the present — a handwritten calligraphy print of the words “Og mit liv" — might seem innocent on the surface, fans couldn't help but notice something strange about the gift. As it turns out, Jeremy Vuolo’s birthday present was made by a surprising someone from the Duggar family's past. The plot thickens, Counting On fans...

If you've followed the Duggars throughout the years, you probably already know the family isn't about lavish birthdays. The big brood usually heads to a local restaurant called the Marketplace Grill in their hometown of Tontitown, Arkansas for birthdays, according to In Touch Weekly, and they're clearly firm believers in the idea that less is more. Case in point: for Vuolo's birthday, Duggar gifted him with a framed calligraphy note that reads: "Og mit liv." The phrase, according to Vuolo, translates to "And live my life" in Norwegian.

So, what is the meaning of this note? Vuolo explained, according to Instagram:

What’s the significance of these words? When Peter Torjesen, a young Norwegian man, was 17 years old, he was challenged to financially support gospel missions. At a church service, he opened his wallet and placed all of its contents into the offering. After a brief moment of reflection, he placed something else into the offering: a piece of paper with the words written upon it, “Og mit liv” (“And my life”). Young Peter would go on to give his life on the foreign mission field in China. A valuable daily reminder that to live is Christ and to die is gain (Philippians 1:21).

While Vuolo's explanation is interesting (you learn something new every day, right?) more people were intrigued with the ending of his note. "Calligraphy by @marjorie.e.jackson," Vuolo wrote at the end of his lengthy message.

It's difficult not to forget Jackson, a vivacious and outgoing young woman, who dated Josiah for a brief four months, according to TLC. In fact, Jackson captivated fans with her bubbly personality that she put on full display in their courtship announcement video.

Considering Jackson was a hit with fans, viewers were understandably upset when the courtship was called off in August 2015. "Marjorie and I had a good time together,” Josiah explained to People after the breakup. “We were just trying to follow God’s lead on everything. She didn’t feel that it was the right timing then, so we called it quits for a bit.”

Jim Bob and Michelle echoed the positive vibes in a statement to People, sharing:

Both Josiah and Marjorie have enjoyed getting to know each other and to build their friendship over the past months. We are so grateful that they each are seeking the Lord’s will for their future. A few weeks ago Marjorie and Josiah agreed to end their courtship, keeping in step with what they believe the Lord’s will is. Both are thankful for the time getting to know each other, and their families continue to enjoy each other’s company and close friendship.

As Jim Bob and Michelle said in their statement, the exes' families planned to "enjoy each other’s company and close friendship," following the breakup. And it looks like the parents weren't kidding because Jackson crafted a unique gift for Vuolo's special day.

Of course, fans couldn't help but comment on the interesting development. In a Reddit post titled, "Jinger gifted Jeremy some calligraphy by THE Marjorie?," one fan wrote: "They must have ended things on good terms these families all seem to be intwined somehow."

Another person chimed in: "Josiah said after the breakup that he and Marjorie would remain good friends. Nobody believed it because he deleted all his pictures of her off Instagram and the family never mentions her."

"So Marjorie is still hanging around, is she??" someone else pondered.

To be honest, it's not too surprising Jackson is seemingly in touch with Duggars given the small size of their religious circle in Arkansas. One fan in the Duggar Snark Reddit agreed with this sentiment, arguing:

Their families were friends before the courtship. And I’m sure that they remained friends after. And the way their courtships work, it’s really hard for someone to be able to say “we broke up, you can’t talk to them anymore” cause the whole family is in the relationship.

Although the lasting connection makes sense, some people think the ongoing relationship is inappropriate. "I would feel so freaking awkward if my family was still friends with my ex!" someone wrote.

"I wonder how Josiah feels about that," one person asked.

Vuolo and Duggar, however, were probably able to put any awkwardness aside to help Jackson out professionally. Just a few weeks before Vuolo's birthday, Jackson advertised her "hand crafted prints" business to help pay for expenses during her next semester at college. She wrote on Instagram:

I created a plethora of hand crafted prints for your visual enjoyment. AND I’M SELLING A FEW! Help put food on my table this semester by checking them out ... I have a limited stock of prints, so availability varies ~ 1st come, 1st serve!! Perfect for gifts, or for adding that extra touch your dorm/house/cubicle needs. ⚡️

Either way, it's great Vuolo is happy with his customized birthday gift. Although some people might find it a bit odd that Jackson made the present, all that matters is Vuolo's special day was brightened because of it.