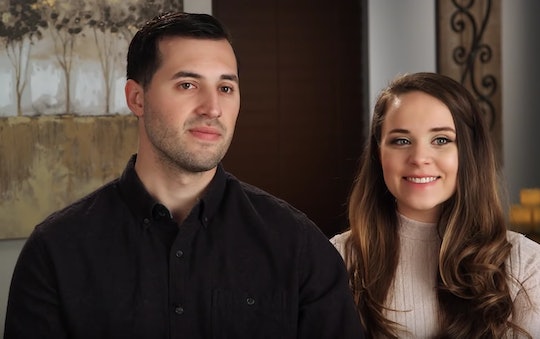 There comes a time in every father's life when they just can't resist a good ol' dad joke opportunity. Just recently, in fact, Jinger Duggar's husband and Counting On star Jeremy Vuolo showed off his dad joke chops in a sweet post about their daughter Felicity. While most just shrug and say something like "oh boy" when see very punny dad joke, one of his followers decided to call the reality star and pastor out on it. But don't worry, it turned into a pretty silly interaction.

Vuolo took to Instagram earlier this week to share the cutest photo of Felicity, his 1-year-old daughter with Jinger, standing in a yard, holding a dandelion, and staring directly into the camera. It's a truly adorable photo, but what makes it even better might is it's caption.

"I think she's dandy and I'm not lion," Vuolo wrote on Instagram.

However, as In Touch Weekly first reported, one of Voulo's followers, didn't seem to totally appreciate his puns, writing in the comments: "You are officially a dad with that caption. All aboard the cringe train!"

But don't worry, Vuolo, who's currently a pastor, didn't seem too offended by the comment. In fact, he had a pretty hilarious response. "Calling out a dad joke...with a dad joke," he wrote to the commenter. "Well played, sir."

Hey, at least he is open to feedback, right? Vuolo's other followers, however, seemed to love his corny sense of humor. "Best caption ever," one fan wrote, while another said, "Too funny Jeremy!" One more wrote, "Dad joke is spot on @jeremy_vuolo !! I love it."

Let's just say little Felicity, who turns 2 years old in July, has a lifetime of dad jokes to look forward to and cringe at. And let's hope many of them are documented on Instagram for Counting On fans to do the same.