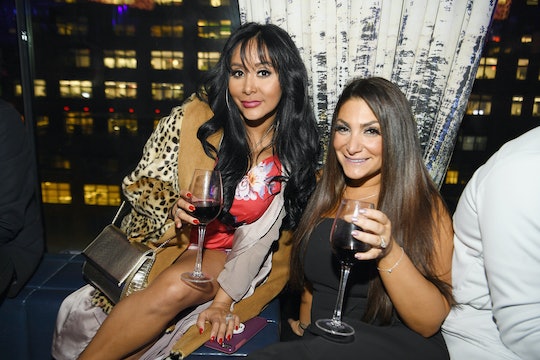 Nearly 10 years ago, Nicole "Snooki" Polizzi and Deena Cortese made their MTV debut as "Team Meatball" on Jersey Shore. Fans instantly fell in love with their pair's over-the-top antics. While the pair are still best friends, and still on TV, they've grown up a lot since 2009. They're moms now, but that hasn't changed their friendship much. In fact, it's made it that much more lovable and relatable. For example, Jersey Shore's Snooki and Deena debuted their adorable sons as the next "Team Meatball" generation, and, naturally, fans are eating it up.

On Saturday, Polizzi, Cortese, and their husbands gathered for a day on the water with their kids. Polizzi shared a photo of her youngest son, Angelo, laying on the floor next to Cortese's son Christopher, aka CJ. The younger of the two appeared in a simple white onesie, seemingly holding baby Christopher's hand in his. It's almost too cute to handle, honestly. Cortese's son, meanwhile, looks beach-ready in a swim shirt and trunks.

"Introducing the next generation of Team Meatball," Snooki captioned the adorable image.

Fans of the original "Team Meatball" flooded the comments, of course, revealing that they were looking forward to what's to come.

"Is it weird I cant wait for this already," one person commented.

"I hope they do a season of all your kids meeting up at the shore house," a hopeful fan wrote in the comments.

"move over pauly and vinny...these are the future 'Double Shot at Love' stars ...where the mommas are doing the Interviewing," another person commented.

Nearly all of the Jersey Shore cast has kids now and they often get together with them. In May, Snooki, Cortese, and JWoww gathered at the Jersey Shore with their kids for Polizzi's baby sprinkle, E! News reported. JWoww posted photos of Snooki's oldest son, Lorenzo, and daughter Giovanna hanging out with her daughter Meilani and Cortese's son. "Some of 2.0," JWoww captioned the photo. "Lorenzo is so handsome here I can't deal."

Snooki welcomed her third child with husband Jionni LaValle on May 30, according to Us Weekly, and she confirmed his arrival on Instagram, revealing her little peanut's birth stats and full name to fans. "Angelo James LaValle 7.5 lbs," she wrote alongside a photo of the newborn.

Days after she gave birth, Snooki got real about her labor experience with her third child during an episode of her podcast, It's Happening. The fabulous mamaw admitted on the show that she thought it would be a lot easier the third time around than it actually was. "I thought [Angelo] was really gonna pop out like, quicker. Like I thought he was just gonna walk out of my vagina, but it didn't happen," she shared on the podcast, revealing that her water broke while she was recording another episode, and she rushed to the hospital to begin hours of labor.

At this point, Snooki has pretty much mastered motherhood and kept fans laughing through it all. I can't wait to see what her little ones and the rest of the Jersey Shore kids get into in the future.