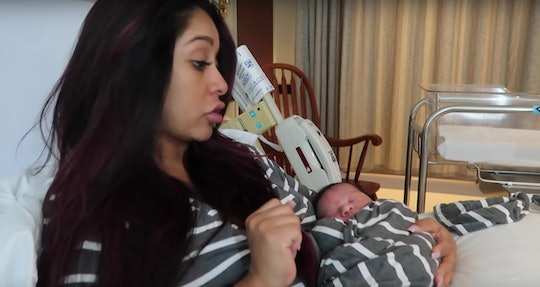 Nicole "Snooki" Polizzi is officially a mother of three. While nothing can totally prepare you for giving birth again, the Jersey Shore star recently candid about childbirth and all it entails on her podcast, It's Happening. In it, she revealed where she was when her water broke, how long it took to welcome son Angelo into the world, and exactly how hard her labor really was. In fact, Snooki's quotes about birth and everything postpartum are so real, every mawma can relate.

Polizzi has always been candid with fans about everything, especially motherhood. Recently she found herself the subject of controversy after speaking candidly about wanting to return to the gym days after giving birth. The reality TV star revealed to the public in an edit on the Instagram post that following her delivery, she was leaking milk from her breasts, she was sore, and sporting a diaper "the size of Texas" around the house — which anyone who's ever been pregnant can totally appreciate — and simply wanted to "look on the bright side of things" and feel normal again, which looks and feels different for everyone.

Fortunately, the backlash hasn't slowed her down at all. Snooki is still sharing glimpses into her postpartum experience with fans, and they're loving every second of it. And her most recent podcast episodes have been full of little nuggets of information any mom can appreciate, whether it's their first child or their fifth.