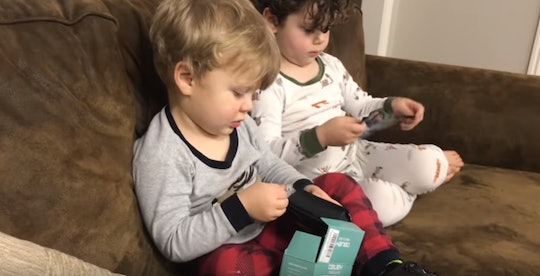 Mother of three and Counting On star Jessa Duggar has a plan for her children's birthdays that will hopefully help her little ones really enjoy their special day. Instead of doing one big party with tons of gifts and sugary cake on a single day, Jessa revealed in a new video on her family's YouTube channel that she and her husband Ben Seewald have decided to make birthdays a week-long celebration.

The TLC star recently celebrated her son Henry's third birthday, and although he officially turned one year older on Feb. 6, Jessa and Ben celebrated this milestone over several days because they thought it would be "fun" and "more memorable" for him. "The process of kids opening gifts on a birthday, at a party, it's often a rushed event where they tear open one and then they're on to the next gift," Jessa says in the video, "so this year Ben and I decided that we wanted to do things differently."

The parents weren't just concerned about how overwhelmed Henry might feel, but also that he wouldn't be able to really take his gifts in and appreciate them. She added that "watching Henry's excitement as he opened each one of his gifts was absolutely priceless."

This year, Ben and Jessa had Henry open a present a day for one week, but these gift didn't come from "the kids' toy aisle." Instead, they gave Henry things like books and other educational presents, even some new snacks like red bananas, something both Henry and his older brother Spurgeon got to try together.

One of the sweetest elements of the new way the family chose to celebrate was how excited Henry's older brother was to see him open his new presents, which included a bird feeder and new underwear. (Especially the new underwear, he could barely contain himself when he realized one pair were decorated with hammerhead sharks.)

Jessa didn't worry about getting bogged down by all the wrapping paper, instead allowing Henry to open the package his gifts came in when they were delivered. Not only does this surely save time, but it is also great for the environment.

All in all, Jessa's decision to space Henry's gifts out over a week seems like a great idea for parents who want their kids to savor the little things in life, like the new bird feeder Jessa and her kids woke up in the morning to watch. As she put it, "Now for many happy mornings of bird watching!"

More Like This
Aww! 2-Year-Old Archie Is "Very Happy" To Be A Big Brother
It’s Britney(‘s Birthday), Bitch!
Julia Roberts Shared A Rare Photo Of Her Twins Hazel & Finn On Their 18th Birthday
Celine Dion Shares She's Been Diagnosed With A Rare Neurological Disorder