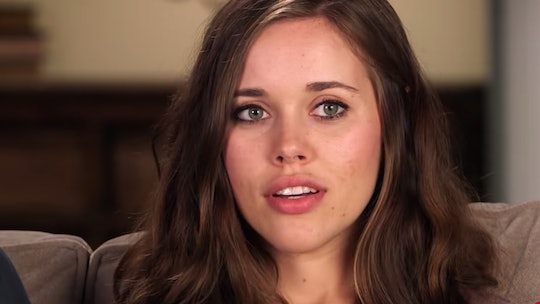 Counting On fans have really been lamenting Jessa Duggar's presence on social media lately. Actually they've been lamenting the fact that she hasn't really been taking to social media with her usual vigor. There have been a few comments on her Instagram posts of the "What's wrong? Are you alright?" variety, which is sort of sweet I guess. But also... she did just give birth to her third child, which can take up a person's time if memory serves. But everyone can relax now because she's back on social media. Jessa Duggar shared a post about baby Ivy after a small hiatus, and it sounds as though she's just having a great time getting to know her little girl.

Jessa and her husband Ben Seewald welcomed baby girl Ivy Jane on May 26, 10 days before her actual due date. Ivy is the third child for the couple who are already parents to 3-year-old son Spurgeon and 2-year-old son Henry. Despite being born early at the couple's home in Arkansas, Ivy was a nice healthy weight of 7 pounds and 14 ounces and her parents said in a statement to People at the time: "She feels so tiny compared to her siblings! We’re so grateful to God for this precious gift. She is already so loved. Her big brothers adore her!"

Since Ivy's arrival, her mother has posted several updates about her growing family. Photos of both of her older boys kissing their baby sister and the little girl on her own. Jessa also posted a heartwarming photo of Ivy with her great-grandmother Mary Duggar, who died by accidental drowning not long after Ivy's birth.

Between losing her grandmother and trying to adjust to being a mom of three instead of a mom of two, it's no surprise that Jessa might have needed to take a break from posting on social media for awhile. But she seems to have found a renewed energy lately, posting a sweet photo of Ivy sitting on the sofa as her baby girl nears the three-month mark.

Nearly 16lbs, and positively the sweetest disposition I’ve ever know in a baby. She’ll be 3 months old next week. Where on earth has the time gone? How has 1/4 a year already passed? Time slow down...

Fans were excited to see an updated photo of the little girl, commenting on her similarity in looks to both her older brother Spurgeon and her cousin, Jinger Vuolo's little girl Felicity.

These past few months have probably been a big adjustment for Jessa, although if her little girl Ivy has a "sweet disposition" that would arguably make it easier for her. But the reality is, adding a third child under three means you have more children than hands. It can be overwhelming, and the last thing you have time for is trying to update your social media all the time.

Which is why, now that Jessa has taken time out of her busy schedule to share news of Ivy with fans, I hope people treat her with kindness. Mom-shamers need not apply please.