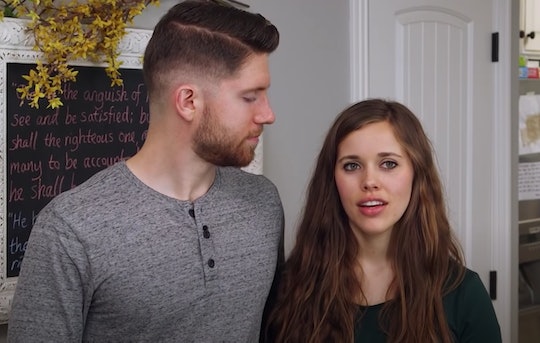 It may seem like the Duggar family is always growing, but Counting On star Jessa Duggar quickly squashed speculation that she's pregnant with her fourth child with a perfect response to a curious fan who commented on her "bump."

The Duggar family is certainly in the midst of a tiny baby boom; Joy-Anna Duggar is currently 37 weeks pregnant with her second child, a baby girl, following a heartbreaking miscarriage and Jinger Duggar is also currently pregnant with her second child. But Jinger and Joy-Anna's older sister Jessa promptly shut down a fan asking if she was going to make a pregnancy announcement soon and, somewhat rudely, said they "noticed the bump."

"Will you announce your 4th pregnancy soon?" one follower commented on a photo of 27-year-old Jessa smiling and pushing her daughter on a swing. "Noticed the bump."

In response, Jessa, who shares three adorable kids between the ages of 4 and 1 with husband Ben Seewald, said: "There's no baby behind the bump — only tacos. Thanks for asking."

While she's not currently pregnant, Jessa told Us Weekly in July that she and her husband do want more kids in the future and might even explore adopting. "We're not sure if our next baby will be adopted or not, but that's something that has weighed heavily on our hearts since before we married," she told the magazine las month. "We could wait until all of our kids are grown and gone and then adopt, but I also think it's kind of cool to have an adopted child growing up with the other kids. We're just, in a stage of, like, meeting with people who have adopted and getting their advice, hearing their stories, and seeing what that might look like for us."

So while Duggar fans love a pregnancy announcement, let Jessa's response set the record straight and let's all order some tacos while we're at it.