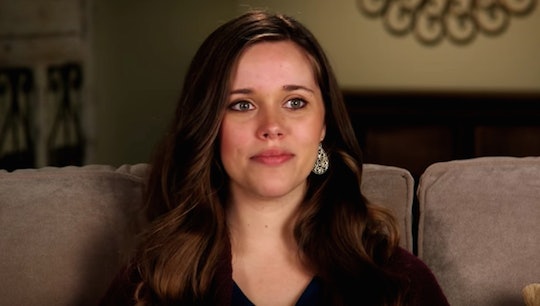 It goes without saying the Duggars are no strangers to controversy. In some cases, the backlash is definitely warranted (see Derick Dillard's Twitter feed for reference), while in other situations, the negative commentary is extremely misguided. Case in point: Parents are getting into a very tense debate about Jessa Duggar's new Instagram video, and the reason why is *beyond* ridiculous.

On Wednesday, Duggar took to Instagram to share a sweet video of her 2-year-old son, Spurgeon, practicing his shapes. In the post's caption, Duggar alerted fans to the fact that one of Spurgeon's cousins (and there are many) has been giving him "lessons."

"One of the cousins must’ve been giving him lessons," Duggar marveled, according to Instagram. Sounds sweet, right?

The unidentified cousin, however, incorrectly labeled a pentagon as a hexagon and a hexagon as an octagon, and these small mistakes has some fans up in arms. And to add insult to injury, Spurgeon's cousin misspelled "shapes" as "shaps" and "square" as "sqare." Insert *gasp* here.

So, why are a few of Duggar's followers upset with such innocent mistakes? Apparently, some people think Duggar did the wrong thing by not correcting Spurgeon when he misidentified the pentagon and hexagon. Not only do some concerned parents think Duggar is setting up Spurgeon for failure (did I mention the kid is just a toddler?) but others are taking it upon themselves to insult her intelligence.

Check out the controversial vid below:

Shortly after Duggar posted the cute video, many people took to the post's comments section to critique her method of teaching.

"I get that a kid did the spelling, fine. But at least teach them the correct shapes. Octagon? Octo- 8. That’s a hexagon," one fan wrote.

A concerned mom also added: "I want to correct because he’s so smart he should have the best material. He’s too young to read the spelling just yet but two shapes are labeled incorrectly and he’s learned that. Maybe it’s meant just to show how adorable he is but the mom in all of us is reacting. That’s a hexagon and pentagon Spurgie!"

Others felt compelled to bash Duggar's views on education and her math skills. "Maybe another kid wrote those, not that it really matters that much since they are incorrect anyway AND nobody in this family gives a rat's ass about math or science anyway." Someone else chimed in: "6 sides is a hexagon and 5 sides is a pentagon FYI."

Others, however, felt it was fine for Spurgeon to misidentify the shapes given his age and the fact that, you know, there's nothing wrong with creative play.

One person said: "I know some of this post is incorrect whether that be spelling mistakes or just incorrect shapes we still should encourage our children and that is clearly what she is doing." Another fan responded: "Why criticize the innocence of children playing school?"

And a particularly informed follower argued: "If you understand Child Development, you would know kids first begin to write by sound. She didn’t give age of the cousin who wrote it, but they seem pretty smart (know ABC’s & sounds) attempting many different shapes & their spellings."

And in this case, I have to take the side with fans who aren't bothered by this video.

For starters, young children should feel excited and energized about learning, and they should be encouraged to explore topics like math in a stress-free environment. And if Spurgeon is thrilled to learn math at such a young age, this should be celebrated as opposed to being nitpicked. I have no doubt that Spurgeon will one day learn what a hexagon and octagon is, and I'm confident his development hasn't been hampered by this one instance of care-free play.

Not to mention, studies have proven that negative feedback is mostly meaningless to children under the age of 12, according to Science Daily. Due to the way a young child's brain is wired, it's important for parents to be enthusiastic and upbeat when teaching their little ones. If a small child hears negative feedback, for example, they won't be able to cognitively process it and therefore learn from it.

So, the main takeaway here is that Duggar is doing just fine with little Spurgeon. And parents who encourage their children to love learning should be celebrated instead of criticized.