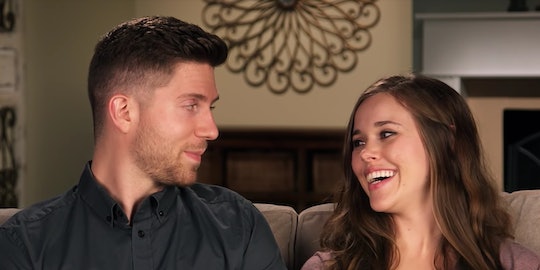 Jessa Duggar and Ben Seewald's little family is too adorable. The Counting On stars just welcomed their third child into the world and everyone is so very excited for them, including members of their own family. People will fall in love with Jessa Duggar's photos of baby Ivy bonding with her brothers, because they could really not be any sweeter together.

Family means a lot to the Duggar family, for obvious reasons. For those unaware, the stars of TLC's Counting On come from a family of 19 kids — and now that those kids are having kids, the family just keeps on growing and growing. Living in a household with 19 people probably isn't easy, but if it teaches anyone anything it's that family and those bonds that you create with family members are super important.

Jessa Duggar is clearly teaching these lessons to her own adorable kids. In new photos, posted to Duggar's Instagram account on Friday, Duggar's 3-year-old son, Spurgeon, and 2-year-old son, Henry, can be seen holding their newborn sibling, Ivy Jane. In the photos, Spurgeon looks at his sister in such a loving way, while Henry seems more interested in playing with her feet than holding his baby sister. Meanwhile, Ivy could not look any happier to be with her brothers — and Duggar can see that, too.

"I'm all teary eyed seeing my boys love on their little sister," Duggar wrote in the caption of the post. "Spurgeon had two people in the house to love on him. Ivy has double that number. As my mom would always say, 'Love multiplies, it doesn't divide.'"

It's kind of hard to believe that Duggar gave birth almost exactly one month ago. She gave birth to Ivy on May 28 in her living room on the couch — this very exciting birth story was documented for TLC. Those same cameras were also able to capture Spurgeon and Henry meeting Ivy for the first time, and their first encounter was so adorable. Clearly not much has changed — they're still getting some necessary family time on the couch, and her boys are still so in love with their sister. The only thing that might seem different is that Ivy looks a little bit older.

Even her own followers can't get over how sweet this sight is.

"He looks so smitten with Ivy, so sweet!," one commenter wrote. "Such a blessing!"

"Spurgeon is such a sweet big brother!," another commenter added. "And Henry's face while playing with Ivy's feet are too cute."

"Love the way she looks at him," another commenter observed. "She may just be his biggest fan."

I think that commenter is very right.

Jessa Duggar's children are clearly following in her footsteps. As previously stated, the Duggar siblings are super close to each other — even if there are 19 of them. Jessa in particular is very close to her younger sister, Jinger Duggar, according to In Touch Weekly, especially since they grew up a year a part from each other.

Clearly, Jessa's kids are taking after her by sharing such a deep bond with each other. They're already off to a great start as a family of five.