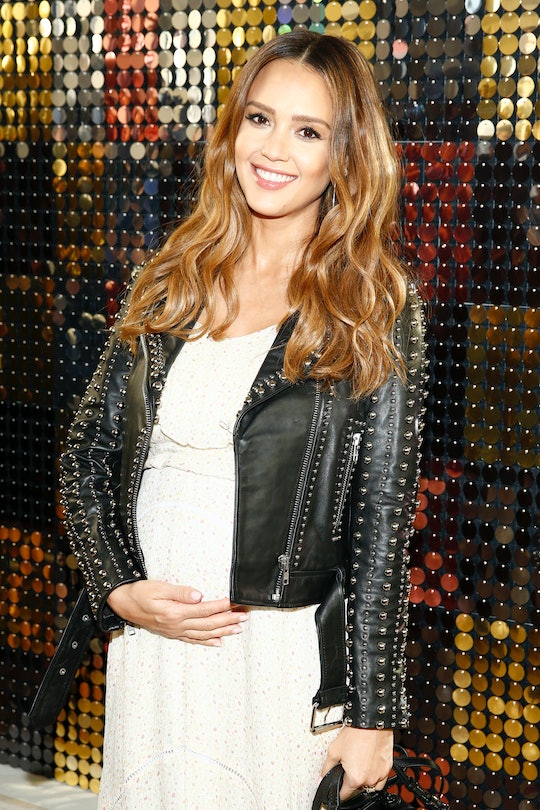 I have to tell you, I'm generally a fan of Jessica Alba. The actress and Honest Company co-founder generally seems pretty cool, from a fan's perspective at any rate. But during a recent interview with Rachael Ray, Alba explained the reason she's excited to have a baby boy after being a mother to two daughters. And honestly? I didn't love it, not one bit.

The 36-year-old mom of daughters Honor Marie and Haven Garner talked with the talk show host about how the family (including husband Cash Warren) are adapting to the idea of having a baby boy in the coming months. According to Parents, Alba said her daughters had a few concerns initially:

My 6-year-old, she was worried about being a middle child, but she gets to be a big sister and a little sister, so she’s stoked about that. And she doesn’t have to compete with another girl.

OK, so I know she's probably just hamming it up for the audience, but even that sentence got my heated. That whole thing about girls competing? I mean, says who? Is that written into our genetic coding, predestined before we even plant one foot on this planet?

While I didn't love that, it was actually Alba's reason for wanting a son that made me squirm. According to People, she told Ray:

For me... the girls love their dad. I want someone to love me more.

Again, I want to point out that yes, I can tell that Alba is (sort of) kidding around. But there's a desperately depressing, old-fashioned stereotype hidden in that joke. In fact, Alba's comments about parenting seemed to be (jokingly) chock full of old parenting stereotypes.

Here's another beauty: the fun "party" dad and the martyred, overworked mom. As she said to Ray during her interview, when Warren comes home their daughters are like:

And so it seems she is hoping for a son to bring balance to the Force, as it were. A little man who won't compete with his sisters, and will be charged with loving his mother the most in the world.

As a mother of four sons, I can safely say... best of luck to you, Alba.

Not because my sons don't love me, and to be fair I don't have any daughters to measure their love against, but because they are all 100 different shades of people. Mercurial, kind, hilarious, intense, laid-back, and yes, loving. Their personalities were not predestined by their sex. They are the people they are because of the choices they make, and maybe a little because of the choices I have made. Just as daughters are not predestined to compete with each other, to love their father more, or to treat their mother with offhanded disinterest.

I don't necessarily believe this is how Alba feels about the impending birth of her son; she's way too hip for that. As evidenced by her amazing Juno costume.

But I do think she was playing to the crowd, giving them what they wanted... and perhaps that's what concerns me the most.

Not that Alba — actress-turned-brilliant entrepreneur — said she wanted a son because he wants someone to love her more. But because her audience laughed along. Stereotypes are comfortable. They're familiar, they're easy — and they're almost always wrong.

There are so many reasons to be excited to have a son, trust me. I know from my own experience, my sons have opened my eyes to a different way of looking at the world. But I like to think this can be true of all children. If we don't decide who they are going to be before they're born, that is.