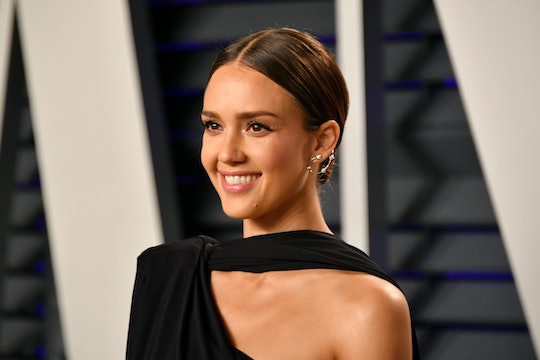 Jessica Alba's Comment About Her Post-Baby Body Is Seriously Fierce

Many famous parents have spoken out about body image before, but Jessica Alba's comment about her post-baby body is generating lots of buzz for good reason. Not only is it brutally honest, but it promotes body positivity in the best way. Get ready to give Alba a round of applause, folks.

Alba, an actress and creator of the Honest Company, penned an essay for InStyle Monday about her long journey to body positivity. And in the piece, she tracked her journey from her first InStyle cover, taken at age 26, to her second, when she was 32 and married with two kids. She also discussed her latest cover at age 37, which was taken after she and her husband, Cash Warren, welcomed their son Hayes into the world. Warren and Alba also have two daughters, Honor and Haven.

Interestingly enough, Alba said her confidence grew with each cover, even though her first shoot captured her "skinniest" self.

"I was still trying to figure out how to be in the public eye and have ownership over who I was," she wrote of the first cover. Repeating the experience a couple years later, the star said "for the first time" in her life she was "really embracing" her "womanhood."

"I was in my early 30s, and it had taken up until then for me to feel confident in my body," she continued.

As for the third cover? At the time, the busy mama was juggling family life and a growing brand, meaning she didn't have much time to prep for the shoot. But here's the best part: She couldn't have cared less.

"If I had been younger, I probably would have been obsessed with dieting and exercising, but instead I thought, 'This is where I’m at. This is my life. And this is my body,'" she wrote.

Reflecting on her journey, the star believes she's gotten better with age and self-love. Alba used her postpartum figure as a jumping off point, writing:

Looking back, when I shot my first InStyle cover, I was insecure. I allowed other people’s ideas of who they thought I should be to define me. Who am I now? I give zero f----s. I have three children. They’ve exploded my body, and I’m cool with it. And I know I’m smart. I don’t care what everybody else thinks.... I’m good.

Even if you're not a big fan of Alba like I am, this comment deserves a round of applause. Not only is she poking holes in the old idea that women should loathe their postpartum bodies, but she's tackling the subject with fierce honesty.

Personally, I'm as equally over the Instagram universe in which women feel pressure to look perfect. But the truth is, having a baby does change your body, and that's OK. Every body is totally different. And just as women come in all shapes and sizes, every new mother has different goals.

I don't know about you guys, but I'm thrilled to see Alba challenging outdated notions of what makes a mom "beautiful." And it's amazing to see how far Alba has come in her body positivity journey.