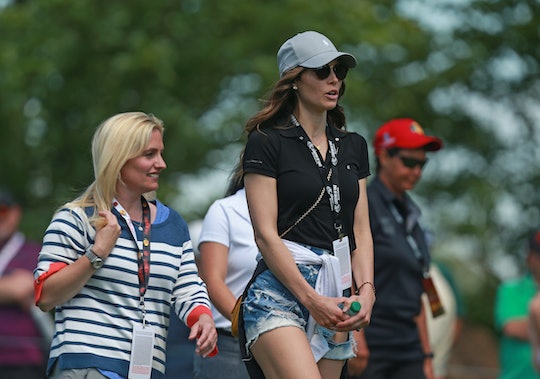 Jessica Biel and husband Justin Timberlake are notoriously protective of their son, Silas. But things were a little different this weekend at a PGA event. Fans got a look at the 4-year-old hanging out with his mom and cheering on his dad and my-oh-my were they excited. Jessica Biel and son Silas had a mother-son day out supporting Justin Timerlake and it was the sweetest thing.

Mom and son were out in full force over the weekend to cheer on Timberlake as he participated in the PGA Tour Champions Bass Pro Shops Legends of Golf event at Big Cedar Lodge in Ridgedale, Missouri, according to Us Weekly.

Mother and son were on hand to watch and support Timberlake, as he worked his way through the the course.

"@justintimberlake had his two biggest supporters with him at @bassprolegendsofgolf. #LiveUnderPar"

And there you have it. 4-year-old Silas Timberlake, obviously taking fashion tips from his hip daddy, wearing black high-top Nikes, a pink button-up, khaki shorts, and of course, pair of black shades.

Timberlake held Silas in his arms as they walked together off the green. Perhaps the cutest part was when Timberlake patted Silas on the back and Silas then attempted to pat his dad back. Like father, like son.

Silas can also be seen riding high on mom's shoulders for a bird's eye view of his dad's putting skills. He then accepts a high five from dad.

Fans, of course, were swooning.

Elizabeth Dawn said, "I love the way their little man, Silas, reaches out to pat his Daddy's back! 💜 They're an adorable little family."

Seeing the two together was just too much for some.

Biel and Timberlake, rarely take their son to public events and if he's in an Instagram posts, his face is usually covered, according to Access Hollywood. So, this was a real treat for many.

TImberlake is fresh off his Man of the Wood world tour, according to Hola, so the family is probably just happy to be together again.

Biel is especially happy to have him home, and couldn't be more proud of her hubby's major accomplishments. In a heartfelt, tear-jerking, Instagram video post commemorating the end of his tour, Biel said:

"Hey Tennessee kid. I’m being quiet because you’re in the next room. It’s your last show, it’s the last Man of the Woods show tonight. And I would say that I’m so proud of you but I feel like that’s the understatement of the century and that somehow that I take ownership to what you’ve done this past year and a half. I just am in absolute awe of you every night to see you up there in your glory, doing what you’ve been put on this Earth to do."

She went on gushing, following with, "You inspire me, you inspire Silas. You inspire everyone around you — all of your fans, all of your friends and family — to work as hard and as with so much passion as you do. You are truly a sight to behold. I’m so happy that you’re going to get some time off. I’m so happy for you and for us."

It's this kind of love that makes all the hard work of marriage worth it, even for a high-profile couple like Biel and Timberlake.

So, will the they forever be a family of three? Not if Timberlake can help it. He wants to have "as many kids as we can", Timberlake said, in an interview with Beats 1 Radio, as per People.

Hopefully fans will get to see more of Silas as he gets older. Because if this is the kind of stuff you'll get to see, it's going to be a fun ride watching him grow up.