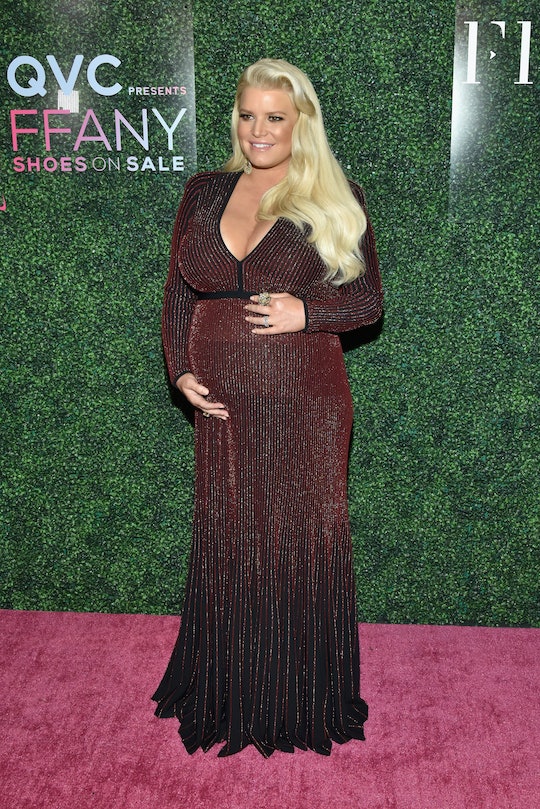 Jessica Simpson's due date is fast approaching. The mom of two is just weeks away from meeting her daughter, but hasn't had the smoothest sailing in her third trimester — she's been very sick. In a new Instagram post, Simpson opened up about getting super sick while pregnant, and her resiliency throughout her final trimester is been admirable.

As previously stated, Simpson's due date could be within a matter of weeks — she's just days away from giving birth to her daughter, Birdie. But it hasn't been all sunshine and rainbows — Simpson has been open about all of the hardships she has experienced during this third pregnancy. On Sunday, Simpson revealed that she had one scary struggle late last month when she was hospitalized for bronchitis. Yes, hospitalized.

In the post, Simpson shared a photo of herself bundled up, wearing a surgical mask (as to not spread germs to her two children — 6-year-old daughter, Maxwell, and 5-year-old son, Ace). And in the caption, she wrote all about her scary (and painful) experience.

"After a week in the hospital for bronchitis (my fourth time in two months), I'm finally home," Simpson wrote. "Coughing with Birdie has been a crazy painful journey."

But, there is some good news — she wrote in the post that she and her daughter are both doing well. She explained:

I am slowly getting healthier every day. Baby girl was monitored and is doing amazing! I am on my way to healthy and counting down the days until I can see her sweet smile. Sending love and prayers to all the mothers who are going or have gone through this.

Simpson is not alone — many of her followers wrote in the comments of her Instagram post that they, too, were sick with bronchitis when they were pregnant. But the good news is, when properly treated, bronchitis doesn't cause complications in pregnancy, according to Healthline.

But because bronchitis is an infection that can make breathing incredibly difficult, according to First Cry, it is important for doctors to monitor both mom and baby to make sure that they're both safe. And judging from Simpson's Instagram caption, it definitely sounds as if her doctors have her bronchitis under control.

But, as previously stated, this definitely isn't the first thing that Simpson has struggled with throughout her third pregnancy.

In February, Simpson shared on Instagram that she had broken her toilet seat cover after she leaned back on it, according to TODAY, in addition to fighting "severe pregnancy acid reflux" that same month, according to Access Hollywood.

Not to mention, Simpson has had severely swollen feet throughout her entire pregnancy, according to E! Online, which she has also documented on Instagram (much to the delight of fans).