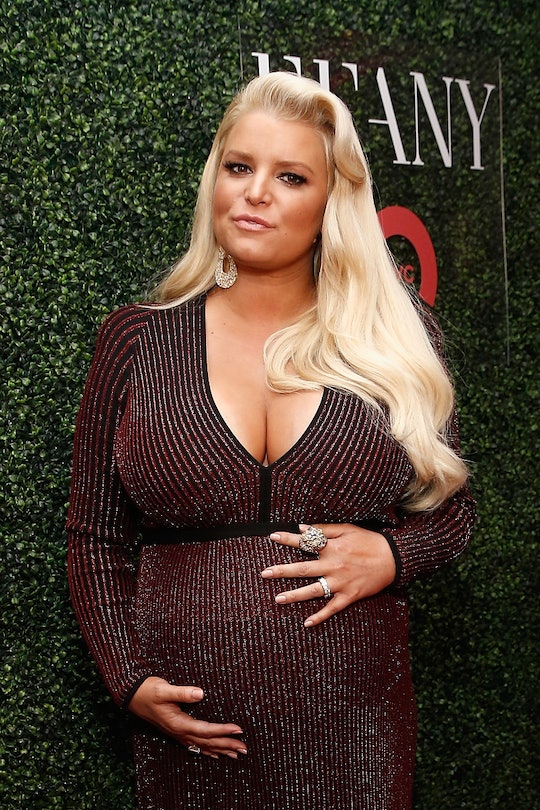 Congrats are in order! Jessica Simpson is officially a mom of three! On Wednesday, March 20, news broke that the singer and fashion designer welcomed a baby girl with her husband Eric Johnson, a former NFL player. Included in that news? The name the couple chose for their sweet little one. And Jessica Simpson's baby's girl's name is absolutely perfect.

Simpson and Johnson's baby girl is named Birdie, per The Blast, as many fans suspected after photos of Simpson's baby shower were posted on Instagram, revealing that the decorations included a sweet sign that said "Birdie's Nest."

Simpson first announced she was pregnant in September 2018, by sharing two posts on her Instagram. The first photo showed the couple's daughter and son, Maxwell and Ace, posing with a pair of black-and-white balloons. Simpson captioned the shot "SURPRISE..."

That same day, she Instagrammed another shot of the kids, presumably taken right after they burst open one of the black-and-white balloons to reveal a ton of pink balloons inside. "This little baby girl will make us a family of five," Simpson wrote alongside the second shot, therefore announcing that she was expecting a girl. "We couldn’t be happier to announce this precious blessing of life."

And with their precious baby girl here, Johnson and Simpson chose the most adorable name for their family's blessing.

Simpson and Johnson reportedly selected the name Birdie for their new daughter for a few reasons, as The Blast noted — it's a family name and Simpson found the name cute.

Leading up to the birth of her third child, Simpson has kept fans updated on her pregnancy, even hinting at her daughter's name during her baby shower — in more ways than one. In addition to the photos in front of the "Birdie's Nest" sign, in almost every photo from the event, Simpson used the caption, "Birdie’s Nest," leading many fans to assume that's the moniker the mom of three had landed on.

Beyond glimpses of her baby shower, Simpson also opened up about how she was feeling during this pregnancy in an interview with Entertainment Tonight. "I'm feeling good," she told the interviewer after being asked how she was feeling. "Third time's definitely harder. I think just the older you get, it's a little bit harder."

One pregnancy side effect Simpson had been experiencing is swollen feet during pregnancy, aka edema, as she shared on social media. In October, she shared a photo of herself icing her feed on a package of Ore-Ida fries. "When you’re pregnant and have to ice your swollen feet before the flight..." she captioned the shot on Twitter.

And just a few days later, she posted a photo of herself icing her feet with a few other frozen foods. "Frozen White rice and Brussel Sprouts for the win tonight," she wrote next to a photo of herself laying down with her feet in the air, balancing the "ice packs."

Now that Simpson's baby girl has finally arrived, though, hopefully she can put the frozen veggies away and clock in lots of snuggles with her newborn daughter with a truly adorable name.

More Like This
Gerber's New Spokesbaby Isa Has The Biggest Brown Eyes & Was Born With A Limb Difference
Here’s What You Need To Know About That Viral 1960s Baby Formula “Recipe”
First Look: The New Jujube x Lilo & Stich Collaboration
Cardi B Shows Us All How To Change Diapers With Long Nails In Helpful & Hilarious Video