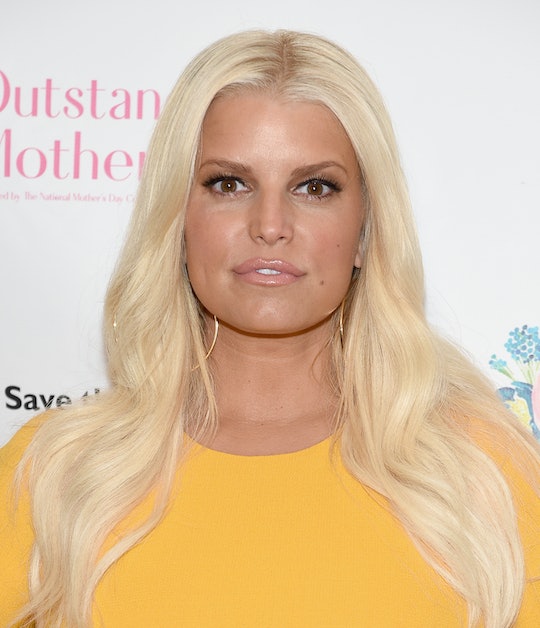 Anyone who was a fan of pop anthems in the late 90s and reality TV in the early 2000s will probably know that Jessica Simpson, queen of both those domains, is expecting her third child. However, it seems that she's been having a tough time this time around. But, fortunately for the expectant mama, Simpson's latest pregnancy update reveals her baby girl might be here sooner rather than later.

In September 2018, Simpson and her husband Eric Johnson announced that they were expecting another daughter together. The couple already share 6-year-old daughter Max, and 5-year-old son Ace. Though she's been through pregnancy twice before, moms of multiple children will likely attest that no two children are exactly the same experience, and this time, it seems Simpson is struggling a bit more than before.

Earlier this month, for instance, Simpson opened up on Instagram about dealing with a slew of issues, including back, chest and sleep problems. "After a month of sciatica pain, followed by 3 weeks of Bronchitis, I figured since my feet fit in my sneaks today. I needed to walk out a lot of anxiety!!" she wrote on Instagram.

But on Monday, Simpson's sister Ashlee told Entertainment Tonight that she's "doing great," despite it all.

And most recently, according to Simpson herself, she posted a photo of herself trying to squeeze between two cars that are closely parked together. Seemingly drawing attention to her expanding stomach, she quipped:

Tight squeeze but I’m pushin’ through.

Seems like she's perhaps also offering a metaphor for her last months of pregnancy. Maybe?

Last month, Extra reported that Simpson shared her new daughter's name, Birdie, with Instagram followers, as she uploaded a shot of her nursery, and captioned it: "Birdie's nest."

Though Simpson hadn't disclosed having any health issues with her previous pregnancies, she has been transparent about her struggle with body-image and weight acceptance throughout them. (Pop culture followers will know that the singer was relentlessly ridiculed for her first pregnancy weight gain, which is illuminating of the toxic cultural expectations women are expected to adhere to virtually at all times in their life.)

However, this time, Simpson is entering her third pregnancy with a sense of confidence, knowing that her beauty is not skin-deep. "My weight has always been something that people like to comment on. I've gotten used to it," she told USA Today in an interview. "Nobody wants to talk about their weight. For me, I have had to come to a place where I am comfortable with myself. I'm a mom now, and get to be a role model for this beautiful little girl."

Though she's an icon for body positivity, she also isn't afraid to poke fun of herself now and again. At the end of 2018, she posted her annual "top 9" picture, and captioned it: "OMG I can't wait to have a waist again and not waddle in 2019."

Simpson also seems to be looking forward to no longer dealing with swollen ankles, as she polled her followers for advice on how to manage this very common pregnancy symptom.

Finally, she shared a photo of herself trying cupping on her lower legs, and then an image of her ankles once the swelling had gone away. She didn't specifically say whether or not it was the cupping that worked, but it seems to be the case.

Despite it all, Simpson has also been open about the fact that, even through swollen ankles, weight gain, and even health concerns, motherhood is the best thing that has ever happened to her.

“Being a mother is the best opportunity and challenge I’ve ever been blessed with in life,” she previously told Us Weekly. “Right now my kids are in this amazing stage where I’m really listening to them without judgment and they’re teaching me so much. These little innocent kids teach me so much about life.”

Soon, her baby girl will be joining their crew and likely teaching her even more.