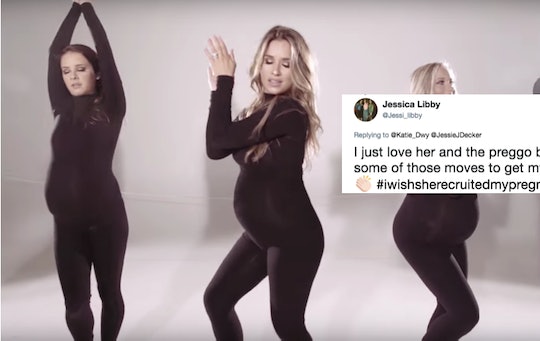 Country star Jessie James Decker is currently 28 weeks along with her third child, and as she did with her previous pregnancies, the proud mama has been happily documenting her growing bump for her fans on social media. But this time around, she's gone a step further, showing off her pregnancy in her latest music video. Jessie James Decker's pregnant "Flip My Hair" video is a celebration of pregnant women, and it's a badass statement her followers are totally here for.

As much as celebrity pregnancies seem to be a perennially hot topic, they rarely seem to cross over into the stars' actual work. Although celebs may proudly share the details of their babies-to-be on Instagram, on magazine covers, or in television interviews, it's still pretty uncommon to see musicians' pregnancies take front and center during a video or a live performance (one of the reasons why Beyoncé's twin-pregnancy-flaunting Grammys performance was such a huge deal). But in her latest video, Decker not only appears visibly pregnant, she literally spends the entire video flanked by other pregnant women, all of them dressed in figure-flaunting bodysuits, unapologetically dancing like sexy goddess queens. And given how, well, unsexy being pregnant can sometimes feel, Decker's "Flip My Hair" video is the perfect reminder that pregnant women have every right to celebrate their bodies whenever they damn well please.

In the video, Decker's pregnancy is on full display (Decker was six months pregnant at the time of the video), as she and four other seemingly heavily pregnant women spend the entire three-minute video dancing barefoot and shaking it for the camera. And honestly, while the song itself may not have always been intended to be a fierce ode to pregnancy, Decker definitely made it into one with this video. While pregnancy still so often seems to cancel out a woman's autonomy over her own body, and assumes that her sexual identity will naturally take a backseat to her maternal instincts, Decker's moves are a reminder that those two elements can — and should — still absolutely coexist.

In the lead up to the video's debut Friday, Decker teased it on her Instagram account, and even without seeing the whole thing, it's clear that her followers were totally pumped. Many applauded Decker for the vid, with fans leaving comments like, "Get it momma," and, "Look at this hottie," while another wrote, "As a mama of 2 I’m loving you beautiful ladies rocking those bellies and making it WORK! Gorgeous!"

Even before the video though, Decker made it pretty clear she had no intention of hiding her pregnant body from the world. Decker and her husband, Tennessee Titans wide receiver, Eric Decker, announced their third pregnancy in an adorable Instagram video back in October (the best part? That the couple's 3-year-old daughter, Vivianne, was totally psyched by the news), and since then, Decker has been sharing plenty of bump updates with her followers.

But in an interview with People shortly after revealing her pregnancy news, Decker shared that, actually, she hadn't always planned on becoming a mom of three. She told the magazine, “I just felt and feel so fulfilled with our two I didn’t really think about it — like, I’m not longing for another child." What changed her mind? Vivianne, whom Decker said wanted another sibling so badly she literally prayed for one every night:

Luckily for Vivianne, she got her wish, and now the already-super-cute young family is about to become an adorable party of five. But as sweet as her growing brood may be, there's something particularly awesome about Decker's ability to maintain her own identity as a woman throughout it all — sexy pregnant dance moves, and all.