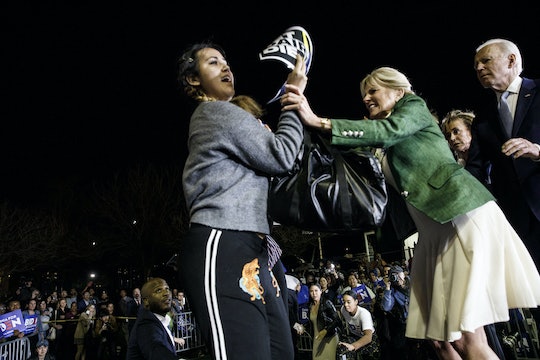 Picture it: a politician stands behind a podium flanked by two women. Protesters lunge at the stage in an effort to derail his victory speech after an impressive night in the polls. He's caught off guard, his wife steps in and takes care of business. Sounds somewhat made up, but it's exactly what Dr. Jill Biden and Symone Sanders did as they shielded Joe Biden from protesters charging the stage on Super Tuesday.

On March 3, the former VP was celebrating an impressive night in Los Angeles as Super Tuesday election results saw him win at least Virginia, Alabama, Minnesota, Tennessee, Oklahoma, Arkansas, and Texas. He offered a victory speech to thank his supporters who had all shown up to celebrate a resurgence as a possible frontrunner for the Democratic presidential candidacy, and naturally his wife Dr. Jill Biden was standing next to him as his chief supporter. And good thing she was.

Not long into his speech, some vegan protesters charged the stage with "let dairy die" signs. Joe Biden does not have Secret Service support anymore, but don't worry about him; he had two women who were waiting in the wings to do some light body-checking if anyone threatened him. Jill Biden and campaign senior advisor Symone Sanders, warriors who walk among us.

As Biden himself stood looking vaguely confused by the situation, his wife full on inserted herself between a protester and her husband, while Sanders grabbed the other woman and walked her off the stage. Keep in mind that Jill Biden would have no way of knowing whether or not the person was armed and still threw herself into the fray.

Tammy Wynette would be so proud. "Stand By Your Man," indeed. Comedian Amy Schumer also shared a video and some spot-on commentary of the moment with the perfectly apt caption: "Jill Biden dominates. Jill Biden is a warrior."

"Check out Jill Biden," she says. "... Here comes the other protester and check out what Jill does, she jumps right in front of Joe and sets up the block... block, block, block, block." Watching the video in slow motion, you can see Jill Biden moving sideways to stay between her husband and the protester until she is removed.

Jill Biden and Sanders' heroics did not go unnoticed on Twitter, with people commenting things like "Don't mess with Jill Biden" and "Just wow. Bring in our new First Lady — FEARLESS, brilliant, benevolent, dignified and accomplished. How do you spell fierce? J-I-L-L B-I-D-E-N!"

Let's not forget Dr. Biden had a worthy team player in Symone Sanders, who casually tweeted that she "broke a nail."