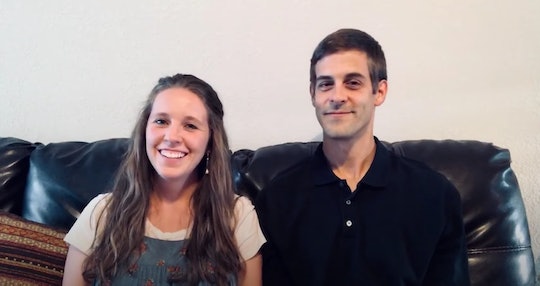 Jill Duggar Reveals She Uses Birth Control, But Not Hormonal Methods Of Contraception

While the Duggars are perhaps best known for their ever-expanding family, they've also piqued people's interest because of their religious views that have helped dictate their morals and beliefs. So when Jill Duggar Dillard revealed she uses "non-hormonal birth control" with her husband Derick, it surely raised a few eyebrows. After all, Jill's mom, Michelle Duggar, has been open about her views on the pill.

"We use birth control, but we prefer to use non-hormonal birth control methods," Jill revealed during a Q&A video posted to her YouTube channel on Wednesday. "Just because we don't want to use anything that could potentially cause an abortion. I think there are probably uses for hormonal birth control for like regulating things and stuff like that, but for us we just want to be careful about that."

Jill shares two sons with her husband Derick, 5-year-old Israel, and 3-year-old Samuel, and while she ABC News in 2014 that they both want "as many kids as God will give us," it sounds like they want some control over when that happens.

"We're more natural minded and sometimes there can be more longer lasting effects from hormonal birth controls and stuff like that so we just steer clear of those," the former Counting On star said during her video. "Eventually we want to have more kids and stuff, Lord willing, so we don't want to mess too much with all of that and potentially cause problems."

Hormonal birth control is safe for most women, according to the American College of Obstetricians and Gynecologists (ACOG), but certain methods could increase the risk of deep vein thrombosis, heart attack, or stroke. But the pill and other forms of hormonal birth control do not typically have lingering effects on fertility, according to Parents. One study, published in 2009, found that 21% participants who stopped using the birth control pill got pregnant in their first cycle. This rate of pregnancy increased to nearly 80% after one year of stopping the pill.

Additionally, hormonal birth control does not cause abortion, according to Planned Parenthood, and does not cause early pregnancy loss, as the ACOG explains.

Jill did not go into detail about the non-hormonal birth control she uses, but there are a number of options like condoms, diaphragms, or a copper IUD.

Jill's parents, who have 19 children, have been longtime critics of hormonal birth control, specifically the pill. In a 2016 post on the Duggar family blog, Jim Bob Duggar explained that Michelle had been on it because they did not want to have children right away. After having their first child, Michelle went back on the pill, but got pregnant while she was on it, and miscarried. "Here we had rejected God's gifts and told Him we wanted to receive them on our time table," Jim Bob wrote. "We asked God to forgive us, and we told God we want to follow Him with our lives and receive any blessings he wants to send our way."

While Jill and her husband are currently using non-hormonal birth control, she and Derick do want more kids in the future. Jill recently said that she is unsure of how many kids she wants in the future, but she's not "going to rule anything out."

"We will stop using birth control whenever we want to get pregnant," Dillard stated in the video.