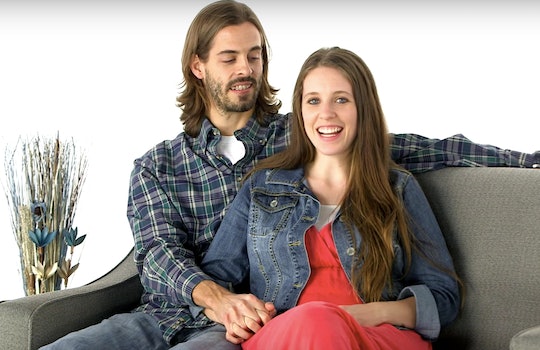 Jill Duggar Started A Midwife Company, & Here's Why That's A Big Deal For The Duggars

The Duggar family name is synonymous with having lots of children, and soon the Dillards might be, too. After years of expressing interest in midwifery and helping to deliver her own siblings children, Jill Duggar started a midwife company called Labor Sit, making her one of the first Duggar women to be employed outside of the home.

On Friday, Jill posted a photo of herself holding a new baby, proclaiming: "Got to help deliver this chunker the other day!" In Touch Weekly reported she referenced her new company, Labor Sit, added "#midwife" to the bottom, and shared the link to her family's website.

The announcement comes at the tail end of recent events between Jill and her husband Derick Dillard's relationship with TLC, the network that employed their family through Counting On. The New York Daily News reported that Derick separated from the network because of his "transphobic" comments about Jazz Jennings, who also has a show on the network. (Dillard didn't immediately respond to Romper's request for commen.) Jill quit Counting On shortly thereafter, though it's unclear why. Though it may or may not have been their way of taking a stance, it did more or less leave them without any income, which could explain why she's working again.

Though the company may be new, Jill's interest in midwifery certainly is not. People reported that she trained for two years to become certified, and ended up helping deliver her sister Joy-Anna's baby. In 2015, Jill shared a photo of her holding her Certified Professional Midwife's (CPM) certificate. However, this has been a point of criticism for her as well. Typically, midwives earn a Certified Nurse Midwife certificate (which requires a Bachelor's Degree, one year of nursing experience, and three years in a nurse-midwifery program). This has led some to argue that she is not qualified for the job.

People reported that the midwife Jill had an apprenticeship with lauded her skills, saying: “From the very first time that I had her in a birth room, she just soaked everything up. I told her at that point that I wasn’t going to let her go — she had to be a midwife!” Jill added that at the time, she was more comfortable just assisting: “I am gaining the skills, but not necessarily wanting to be in charge of the entire situation. It kind of scares me a little. I would rather just be on the sidelines!”

Though starting one's own company may seem like a generally innocuous thing, Jill is actually one of the first Duggar women to have a job outside the house. Brooke Arnold, who grew up in the same church as the Duggars, said on Salon: "Women and mothers working outside of the home is absolutely forbidden in ATI no matter what the financial situation of the family." So though the Duggars haven't explicitly said it is forbidden, most of the women don't appear to and never have held jobs.

This would not be the first time in Duggar family history that fans rose their eyebrows at a woman's employment. In Touch Weekly reported that in October of 2017, while celebrating the 25th birthday of twins John and Jana, Jim-Bob and Michelle Duggar received some backlash for suggesting that John was training to be a pilot, while Jana was just playing piano and staying involved with church. The Duggars wrote on Facebook:

We took our oldest set of twins Jana & John out to one of our favorite restaurants Cracker Barrel for their 25th birthday yesterday (Their birthday is really today!). They both have a ministry heart and are great role models for other young people. John just finished up his pilots license and is staying busy with construction and police work. Jana is a concert pianist and is involved in many ministries. We are so blessed to have such wonderful daughters and sons! Happy 25th Jana and John!

As unfair as it sounds, it's pretty consistent with Duggar rules (which they are fairly adamant about, if nothing else). As fans already know, the family believes strongly in attempting home and natural births first, so it all seems to make sense. After all, having an in-house midwife seems like the most logical thing to do, right alongside shopping en bulk and not hugging before marriage.