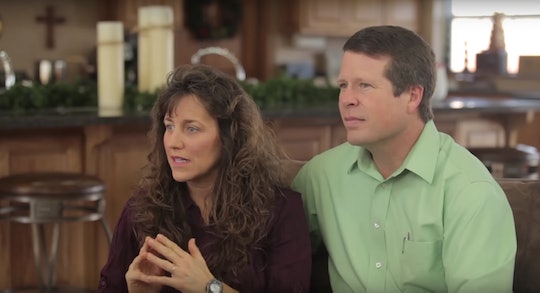 A certain (but significant) subset of reality TV fans have been addicted to the Duggars for years. And the massive, ultraconservative family offers a lot to mystify and fascinate viewers: There's the homeschooling of 19 kids, the strict dating rules that prohibit holding hands before engagement, and the fact that Duggar grandkids are emerging left and right on the 19 Kids & Counting spinoff Counting On. And one glaring question in particular tends to come up when viewers consider the gigantic family: How do the heads of the household afford all these kids? Well, Duggar parents Jim Bob and Michelle Duggar's estimated net worth certainly indicates that their reality TV past has literally paid off when it comes to coming up with the funds to support their family.

It turns out that the Arkansas couple has publicly (and pretty impressively) prided themselves on being debt-free even before they scored the TLC contract that would catapult them to a certain kind of fame. According to Babble, the two married as teenagers and never earned college degrees, but grew their bank account as well as their family with enterprising endeavors such as buying, repairing, and selling used cars; starting and selling a towing business; entering real estate; and leasing land to a cellphone company so it could maintain a transmission tower there.

But, obviously, their big break came when they had 16 kids in 2008 — and landed a one-hour special that aired on both TLC and Discovery Health, The Hollywood Gossip reported. Its popularity, of course, meant that they would launch what would ultimately 19 Kids & Counting in 2009. The reality sensation enjoyed 10 (undoubtedly lucrative) seasons before it ended up 2015.

The end result is that Jim Bob and Michelle Duggar certainly aren't struggling financially the way you may expect the parents of 20 kids (they recently gained permanent custody of a great-nephew, according to Entertainment Tonight) to be. Of course, it also helps that their older kids are out of the house and starting families of their own, meaning they are presumable no longer dependent on Mom and Dad.

According to CelebrityNetWorth.com, 52-year-old Jim Bob Duggar — who also briefly served as a Republican in the Arkansas House of Representatives — boasts an estimated net worth of $3.5 million. Sounds like a lot, but I'm not at all surprised. Way back in 2009, when the Duggars' reality careers were pretty much just getting off the ground, E! News estimated that the family was raking in between $25,000 and $40,000 per episode. That's about 10 percent of the show's possible per-episode budget at the time, and, as the outlet noted, the budget would grow as the show's popularity did.

Considering that it takes about four or five days to film one episode, it's not at all too out-there to think that the Duggars started ballin' pretty early on.

Unfortunately for Jim Bob and Michelle Duggar, though, their days of cashing in on their reality TV ventures is pretty much completely over. That's because TLC ended 19 Kids & Counting in 2015 after oldest son Josh Duggar was investigated for sexual abuse allegations that originally surfaced when he was a teenager (the victims were reportedly four of his sisters), and his parents admitted they had known about what had happened and worked to keep it quiet, according to The Washington Post.

So, TLC opted to yank the show entirely, not only ceasing further production but declining to air reruns either, as Entertainment Weekly reported. So, the Duggars will never earn any extra dough from residuals. That, of course, is more unfortunate for the victims of Josh Duggar's sexual abuse than it is for his parents' bank account, but still presents a definite lose-lose.